I couldn’t sleep last night, so I got up and pulled out an old issue of Monocle magazine from my nightstand. I then stumbled upon the following article by Taras Grescoe. 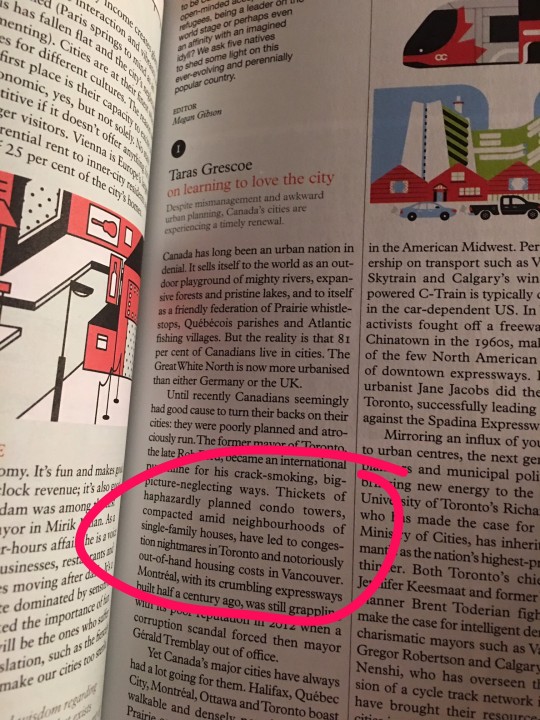 What really stood out for me was this line:

“Thickets of haphazardly planned condo towers, compacted amid neighbourhoods of single-family houses, have led to congestion nightmares in Toronto and notoriously out-of-hand housing costs in Vancouver.”

It bothered me for a few reasons:

– The frame of reference is the single-family house. It perpetuates the cultural bias that what matters most in cities, like Toronto and Vancouver, is low-rise housing.

– I don’t get the “haphazardly planned” comment. New tower development has been heavily concentrated in the downtown core, growth centers, along the Yonge subway corridor, and so on. Their built form is also significantly influenced by their relationship to these low-rise “Neighbourhoods.”

– I believe that building up, as opposed to out, is the way to address congestion nightmares. Though I will concede that our ability to plan and execute on transit in this city is positively deplorable.

– How did thickets of condos create an affordability problem in Vancouver? Many factors at play in this city, including a powerful geographic supply constraint.

Those are just a few of my thoughts from early this morning. What are yours?