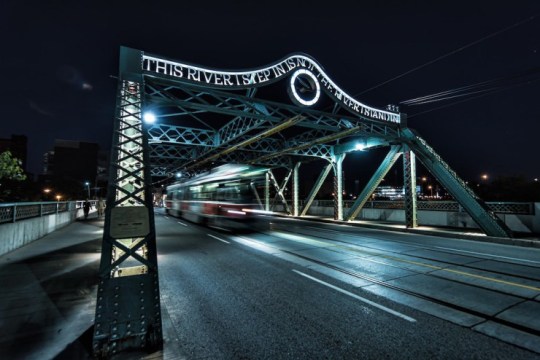 I was over at the Riverside Bridge yesterday taking photos and I was reminded of Eldon Garnet’s installation called, TIME: AND A CLOCK (1995).

The work spans a few physical sites, but perhaps the most well known component is the line of text on the west side of the bridge, which reads in 18″ high letters: “This river I step in is not the river I stand in.” (Photo above from Garnet’s website.)

If you’re from Toronto, you may be already be familiar with this installation. But I love the message and I think it’s an important one. So I thought I would reiterate it here on the blog.

The text is derived from the thinking of the Greek philosopher Heraclitus. Its meaning is a simple one: change is fundamental to the universe.

Neighborhoods change. Cities change. Industries change. We change. The river you first step into, is not the same river that you’ll be standing in. That initial river has come and gone, replaced by a new river. In the words of Heraclitus, “No man ever steps in the same river twice.”

As people, organizations and cities age, there can be a tendency to resist change. I believe in fighting that tendency.

Because that’s how established rich companies get destroyed by young poor companies. They – the incumbents – underestimate the importance of change. They forget that the river is constantly flowing.