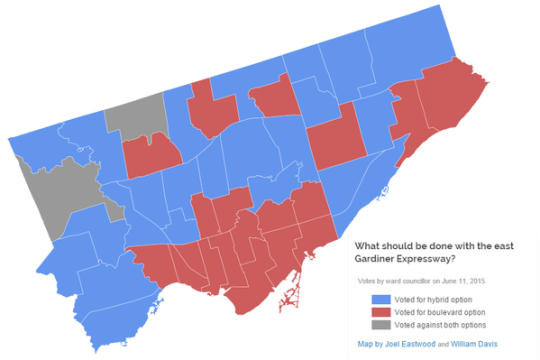 After 2 days of debate, City Council voted this afternoon, 24-21, in favor of rebuilding the elevated Gardiner Expressway East (”hybrid” option) that runs along the city’s eastern waterfront.

And once again, Toronto is largely divided. See above image prepared by Joel Eastwood and William Davis.

It’s the old city of Toronto (who uniformly wanted the elevated highway replaced with a boulevard) versus the rest of the city (who for the most part voted for the hybrid).

I can’t begin to tell you how deeply disappointed I am by not only the outcome, but also by how it happened and why it may have happened. For all of our talk about being a progressive global city, today we are clearly not that.

Because more than a vote on what to do with the Gardiner East, today was a vote on how we believe we should be building this city for the future.

When the Gardiner East was first built, the vision was one of fluid private mobility, where it would be possible to quickly circle around and across the city on an endless sea of highways. Detroit was doing it. Baltimore was doing it. Everybody was doing it.

In other words, we were building our environment around the car. And our primary – some would say singular – focus was to ensure that the car could move unencumbered around the city. That’s why Toronto is now home to the busiest and one of the widest highways in the world.

But despite all this, Toronto remains crippled by gridlock. And so does every other big city city in the world that has bet on cars as the solution. Why is that?

Because that model doesn’t work.

The I-10 Katy Freeway in Houston is 26 lanes at its widest point. It is the largest highway in the world by number of lanes. But from 2011 to 2014, commute times in some sections increased by as much as 51%. Is that because they haven’t built enough highway? How much is enough?

By comparison let’s look at a city that has bet on transit as the solution: Tokyo.

The metropolitan area of Tokyo is approximately 37.8 million people. That’s more than the entire population of Canada and by most accounts is the largest urban region in the world. But despite its size, Tokyo is consistently ranked as one of the most livable cities in the world and also one of the most efficiently run.

So when I heard Councillors going on today about how a vote for the “hybrid” is a vote not to increase congestion and gridlock, it became abundantly clear that many – apparently most – people in this city still do not appreciate what it is going to take to get us efficiently moving as this region approaches 10 million people by 2041.

This should not have been a debate about 3 minutes. That, as I’ve said before, is a red herring.

Of course, there was lots of lip service to transit. Many seemed to agree that transit is the future. And some even went so far as to say that removing the Gardiner East and replacing it with a boulevard is the right thing to do, but that we simply can’t do it now because we haven’t made the requisite investments in transit.

If transit is truly what we want, then we why don’t we take the boulevard savings and put it directly into transit?

To me it’s like saying: I really want to be homeowner, but I can’t afford it right now. So instead, I’m going spend more on rent so that I can burn through more money and make it even more difficult for myself to eventually become a homeowner.

Because that is what happened today.

We voted to overspend on a stretch of elevated highway that is used by a small sliver of downtown commuters (~3%), instead of replacing it with a cost-effective surface boulevard (with similar road capacities) and then prioritizing the proven solution to urban congestion: transit.

At the same time, we also made a number of other things clear in today’s vote.

I believe that cars will always be a part of our cities, but I don’t believe in putting them ahead of you and I. I guess old habits die hard. That my friends, really sucks.