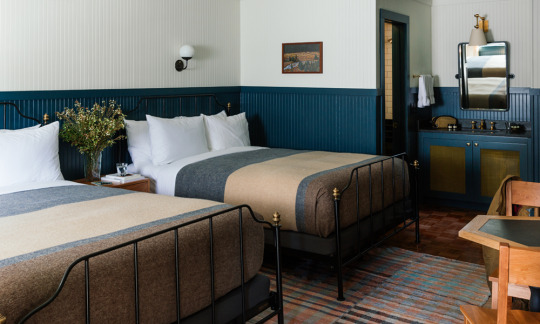 Jackson, Wyoming is one of my favorite places on the planet. (Here is a ski/snowboard video that my friends and I made a few years ago in Jackson.)

What I appreciate about their approach, is the emphasis on creating something that feels local and contextual. Here are a couple of snippets from Surface Magazine:

The designers wanted to avoid a rustic feel, or what Ruben Caldwell, one of Studio Tack’s four partners and an avid backcountry skier, calls “Mountain Modern,” referring to architecture, common in places like Vail, Colorado, and Lake Tahoe, California, that excessively uses reclaimed wood and Cor-Ten steel. “We knew we didn’t want to steer anywhere near that,” says Chou, a long-time snowboarder who more recently got into skiing. “It takes a bit of familiarity with ski towns to know what you don’t want to do.”

The vibrancy of Jackson’s local culture impressed the design team—and Caldwell so much so that he moved there full-time last year. “As a design team,” Caldwell says, “we’re hyper-aware of the need for projects to be deeply embedded into the local scene.”

It’s easier to copy and paste. But the results are always better when you take a bit of time to understand a place.