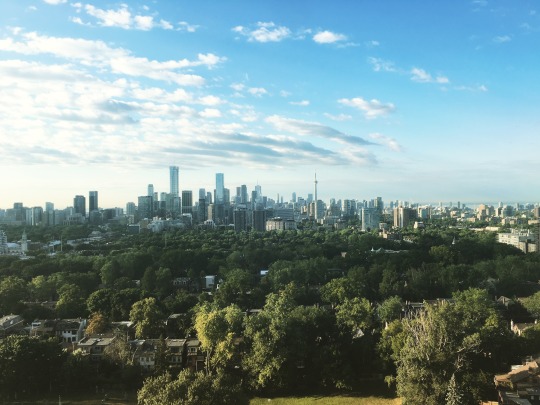 Toronto is home base. I hope it’s clear how much I love this city. Sure, I’m a big fan of New York and Miami and Vancouver and Berlin and Tokyo and Jackson (to name some of the places I have on my phone’s weather app), but I made a deliberate choice to station myself here.

Because unlike some of the other industries I write about on this blog, city building is hyper local. What I do involves the built environment. And that doesn’t generally happen via a laptop on a beach in Bali (at least not for extended periods of time).

It happens by being on the ground, interfacing with local communities, meeting face-to-face with the city, and poring over drawings with smart people who know far more about their respective disciplines than I ever will. It is a collaborative and local effort. It’s about getting into the details.

And so to be successful in this business, I think it helps to find a home and take long bets. I’m not saying that I will never work on projects in other cities (I have and I would), but I am saying that I’m not moving to New York right now and that home remains Toronto.

On that note, here’s what I have to tell you. Later this year I’ll be joining Slate Asset Management as VP of Development.

A bit about Slate:

Slate is one of the most active acquirers, owners, and managers of real estate in Canada right now. Founded in 2005 by two brothers (Blair and Brady), Slate has over $3 billion of assets under management across over 16 million square feet and over 130 properties.

All of this is done through four main investment vehicles:

1) The first is Slate Advisors. It acts on behalf of and alongside private institutional investors — such as Greystone.

2) The second is Slate Office REIT (TSE:SOT.UN). It is a pure play Canadian office REIT focused on downtown and suburban properties all across the country.

3) The third is Slate Retail REIT (TSX:SRT.U). It is a pure play REIT entirely focused on grocery-anchored U.S. retail properties. (Remember how many times I’ve written on this blog about how grocery has one of the lowest online shopping penetrations?)

4) And the fourth: Slate is also starting a grocery-anchored retail platform in Germany. It is similar to #3, except that it’s in Germany.

Most recently, Slate has been in the news because of the position it has taken at Yonge + St Clair in midtown Toronto — a perfect example of “finding a home and taking long bets.” Slate, in partnership with Greystone, owns all 4 corners of the intersection and about 60% of the properties along the St. Clair corridor.

Here’s a diagram of those Slate buildings: 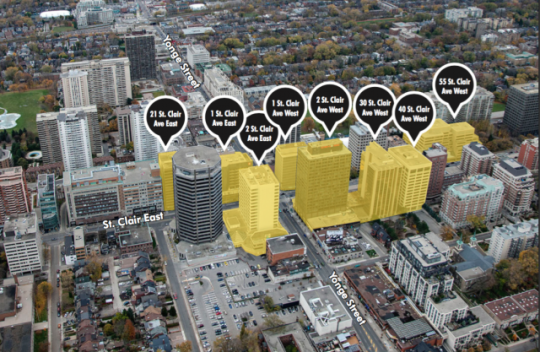 In case you didn’t put two and two together, the 8-storey mural I wrote about two weeks ago is going up (right now) on the side of a Slate building (1 St Clair Avenue West — shown above). The British street artist known as Phlegm is doing it.

Up until today, the focus of Slate has largely been on acquiring undervalued / overlooked real estate and creating value through re-leasing and overall repositioning. That will certainly continue. But given what I do, I am sure you can posit what’s also next.

I’m genuinely excited to be joining such a talented group of real estate professionals. As I mentioned last week, I wasn’t in the market for anything new. I was heads down working on cool projects. But life happens. And Slate quickly demonstrated to me that the incredible success they have seen to date is precisely because of how progressive, nimble, and entrepreneurial they are.

On that note, I have “one more thing” to share today.

In parallel to all of this, and with the support of Slate, I am also starting a boutique city building company called Globizen. The name is derived from Global + Citizen.

The objective is to build a company that embodies everything I write about on this blog. I want it to be lifestyle and design-driven. I want it to leverage technology to improve the way that cities and the building industry operate. And I want it to function as a vertically integrated real state + design firm, focused on sustainable urban infill development. Think of it as city building by and for the responsible global citizen.

It’s still early days, but the thinking is that this new platform could compliment the larger Slate platform in some way. It’s too early to say how exactly, but everyone is open to having those discussions. And that’s what matters at this stage.

I am going to end with a quote. It’s by Partner and Co-Founder, Blair Welch:

I like that a lot. So here’s to finding a home, taking long bets, and not saying can’t. Onward my friends.