This is an interesting piece by Bloomberg summarizing the current state of autonomous vehicles and in particular the (supposed) dominance of Waymo (Alphabet’s self-driving vehicle arm). Many believe they will be the first real entrant into the market. 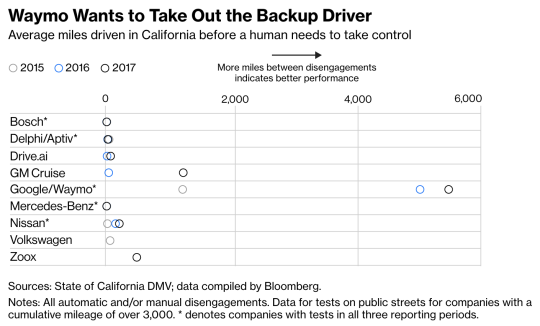 The company is currently running an “Early Rider” program in 25 cities. But its Phoenix trials are the furthest along, which isn’t at all surprising given the city’s car orientation and suburban fabric. Already Waymo has started offering passenger rides without a backup driver in the car.

But I still think that we’ll see a blurring of these priorities, if not outright cannibalization, as the cost per mile plummets. I mean, why own a personal vehicle if it is flat out easier and cheaper to just hail a robotaxi?

Here is an excerpt from the article talking about pricing:

Tasha Keeney, an analyst at ARK Invest, says that Waymo could choose to offer an autonomous ride-hailing service today at around 70 cents a mile—a quarter of the cost for Uber passengers in San Francisco. Over time, she says, robotaxis should get even cheaper—down to 35 cents a mile by 2020, especially if Waymo’s technology proves sturdy enough to need few human safety monitors overseeing the autonomous vehicles remotely. “You could see software-like margins,” Keeney says.

I can’t wait to be driven around for cents on the dollar. Click here to read the full article.