What makes Bosco Verticale (or Vertical Forest) special is its integration of landscape into the tower building typology. In fact, the architect, Stefano Boeri, describes the project as a “skyscraper for trees that also takes humans.”

Here is a photo of the two towers via Wikipedia: 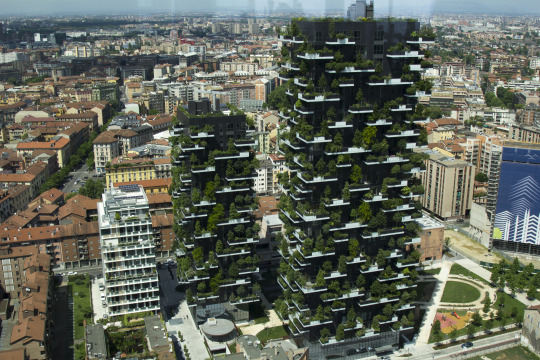 And here is description of the plantings via Houzz:

“The more than 17,000 plantings include 780 full-size trees of 60 species on all sides of both towers for a suspended-garden visual effect. Among the plantings are holly oak, ornamental apple and beech trees, as well as a great mass of smaller plants, such as lavender, azaleas and camellias, positioned among the trees with taller crowns. The plantings provide shade in summer and help filter the air. The number of trees in each building is the equivalent of 1.7 acres of forestland and 18.5 acres of an urban area with single-family dwellings. The vegetation is watered with a greywater filtration system.”

This idea is something that has appeared a lot in theoretical projects. But it is still in its infancy in terms of realized projects. So the architect has also published a book explaining – using drawings and photos – how the project works and how it could be reproduced in other cities. It’s in both Italian and English.

With so many cities trying to build up, as opposed to out, it makes a lot of sense for us to figure out how to make up as livable, enjoyable, and sustainable as possible.