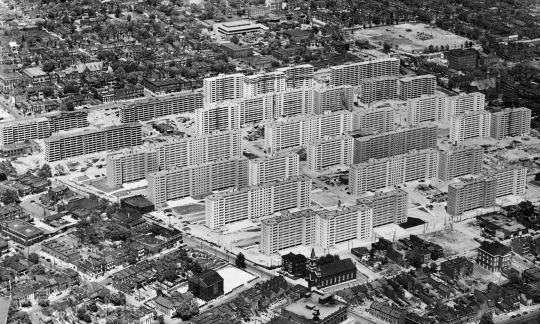 In 1956, a large 57 acre urban renewal project was completed in St. Louis. It consisted of 33 apartment buildings, each 11 storeys tall. The entire complex was known as Pruitt-Igoe.

Early residents seemed to really like the buildings. The first tenant, Frankie Mae Raglin, called it the “nicest place she’d ever had.”

But 16 years later in 1972, the first 3 buildings within Pruitt-Igoe were demolished. And in 1977, architectural historian Charles Jencks proclaimed that the day Pruitt-Igoe was demolished was the day that modern architecture had officially died.

The modernist dream had failed. Architecture had failed us. Segregated “towers in a park” was not the way to socially engineer away poverty and slums from our cities.

This is the narrative that we have told ourselves, not only in St. Louis, but in cities all around the world.

But was it really all architecture’s fault?

Stuyvesant Town in New York (80 acres) shares many of the same architectural ideals that Pruitt-Igoe embodied and it seems to be holding up just fine. The same could be said for Lafayette Park in Detroit (46 acres), which is probably more telling given what the city witnessed in the years following 1956 – the year Lafayette Park was completed.

So the reality is far more complex.

Between 1950 and 1970, St. Louis lost about 30% of its population. Coming on the end, Pruitt-Igoe had a vacancy rate of 88%. Racial tensions were also surging. Here’s how the American Institute of Architects put it back in 2012:

Pruitt-Igoe was built during a tumultuous time in U.S. race relations in a city with an intense history of racial segregation. Pruitt and Igoe were designed as separate, racially segregated projects: Pruitt for African-American residents, Igoe for whites. As the towers were going up, the Supreme Court’s Brown v. Board of Education decision banned segregation. Faced with the possibility of living next to African-American neighbors in an integrated Pruitt-Igoe, white residents moved out en masse, exacerbating Pruitt-Igoe’s vacancy problems.

So while most cities rightfully would’t dare build in the spirit of Pruitt-Igoe today, this was not a strictly architectural problem. There is always an underlying social, political, and economic environment. And unfortunately architecture, alone, cannot solve everything.

If you’re interested in this topic, I recommend you check out a paper by Katharine G. Bristol called, The Pruitt-Igoe Myth.

Image by Bettmann/Corbis via The Guardian