One of the things that Joe Berridge reminded me of in his talk yesterday, is that the story of Toronto is really the story of immigration.

In his words, Toronto has become the success story that it is precisely because we are good at taking in lots of immigrants and making them economically productive.

Sure, there are many things that we could be doing better, but you don’t get to be the most multicultural city on the planet without doing a lot of things right. More than half of this city is now foreign born. The term “visible minority” is quickly expiring. 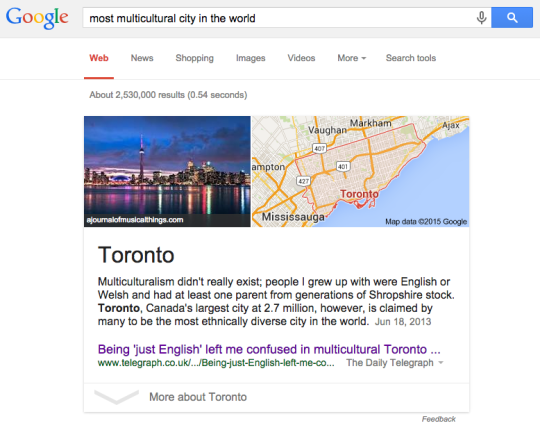 And more than anything else, this accomplishment is arguably what has allowed us to become the global city that we are. Click here for a fascinating chart from the Toronto Star that allows you to see the number and source of immigrants that have come to this city over the last half century.

But of course, Toronto is not alone in this accomplishment.

Urban economist Edward Glaeser wrote a great essay back in 2005 called Urban Colossus: Why is New York America’s Largest City? It’s an incredibly interesting read for those of you interested in cities and so I definitely recommend it.

But the crux of his argument is that New York is the largest and most dominant city in America because of geography – specifically its deep harbor – and because of its success in manufacturing.

What this meant is that New York became the center of shipping in the country and the point of entry for the majority of immigrants coming into the United States. But since transportation costs were still relatively high at the time, most immigrants arrived in New York and stayed in New York.

Luckily, New York had a robust manufacturing economy – notably because of sugar refining, publishing and printing, and the garment industry. This allowed the waves of immigrants flooding into New York to become economically productive.

So the moral of the story is simply that immigration has and will continue to play a pivotal role in the shaping of our cities. Canada has a sub-replacement fertility rate somewhere around 1.61 births per woman (2012). This is lower than that of United States, which is around 1.88 births per woman.

That means that without immigration, we do not grow. We shrink. And that’s usually not a great thing for economies.