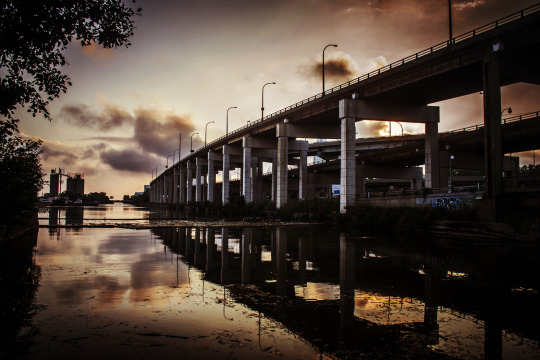 This May 2nd at 1:00pm I’m going to be participating and speaking at a Jane’s Walk here in Toronto called, Gardiner Expressway: To be or not to be?

This will be my first time going to a Jane’s Walk, but it’s clearly a topic that I’m interested in. For over a year I have been arguing that we should remove the Gardiner East (the portion east of Jarvis Street).

This has proved to be a contentious position and topic. One critic said that I only want to remove the Gardiner East so that – as a real estate developer – I can make it harder for people to get into the city, which in turn will force them into buying more condos in the city.

That was not my thinking.

Instead, I view it as an opportunity to truly unlock the eastern portion of Toronto’s waterfront and the Portlands area. Take a look at the Keating Channel (shown above) and tell me whether or not you could imagine a better and more urban kind of waterfront. I get excited when I think of the potential.

And, if we’re going to do this, I believe now is the time, before the area gets developed. Because once it gets developed around the Gardiner, things will never be quite the same – even if we do eventually remove or bury it.

Click here for more information on the Jane’s Walk. Please also keep in mind that there will be many other viewpoints expressed at the Walk. This is just mine.