One of the biggest of those companies is WeWork. As of last month (November 2015), the company had raised close to a billion dollars from investors like JPMorgan Chase, Harvard Management, and Benchmark Capital, and was valued at $10 billion. (Remember though, this is in the private not public markets.)

If you’re unfamiliar with coworking spaces, check out this post from The Spaces. It’s a great demonstration of how beautiful these spaces can be.

All of this is interesting because it speaks to the changing nature of work. There are a lot of people freelancing, participating in the “online gig economy” and working on new ideas. And in many of these cases, they don’t want or need traditional office space and/or they want the community that many of these coworking spaces afford – both offline and online.

But it’s not just the office that is changing. It’s also potentially living spaces. Since 2014, WeWork has been talking about their new coliving concept, WeLive. The idea here is to combine smaller living spaces with larger common areas and create an overall live-work community. And they are not the only ones thinking about this.

Below is a building section of what this might look. It’s from a Vornado Realty presentation. They are working with WeWork to deliver their new WeLive concept in Crystal City, Virginia. 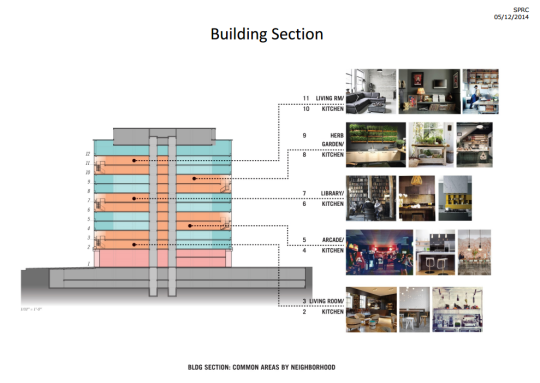 It’s so interesting to see this concept come to fruition. Back in 2008 when I was in architecture school, I worked with a classmate of mine and designed a modular coliving apartment building. It was called the Philly Flex Dwelling and it worked like this:

The idea here was to start with standard floor plates and use a structural exoskeleton to minimize interior columns. This way you could insert whatever prefabricated modules you wanted and also re-purpose the structure should you want to change the building’s use in the future.

This is not that dissimilar from what was originally proposed for One Bloor West here in Toronto. Though the goal there was column-free retail spaces.

The yellow spaces are the shared common areas and the remaining spaces are the residential living “pods.” We also designed a “solar skin” that was perfectly tuned to the building’s orientation and location in Philadelphia. The idea here was to maximize winter sun (for heating) and minimize summer sun (to keep the building cool).

That was a fun project to work on.