Over the weekend I went by the new North store on Ossington for the fitting of my new Focals by North glasses. According to Retail Insider, this is the first retail space in Canada that is entirely dedicated to wearable tech (shout-out to Hullmark and CBRE). Full disclosure: I am not being paid by North, but I was asked if I would accept a pair of Focals and provide my thoughts. So I will be doing that over the coming months on the blog.

Previously known as Thalmic Labs, North is a Waterloo-based company that first attracted attention with the launch of a gesture-control armband known as Myo. What that product did was make digital interactions completely hands-free. It had strong use cases across medicine, music, and business. However, this past October the company announced that it would be moving on from Myo. Enter Focals by North.

Focals are custom-built eyewear with an integrated display that only the wearer can see. It is similar to, for example, BMW’s heads up display, and the idea is that it is a way for you to quickly get the information you want, without pulling out your phone and disengaging from the world. The ambition is human-centric technology that integrates seamlessly.

Here is an example of what that display looks like (it is much better and cooler in person): 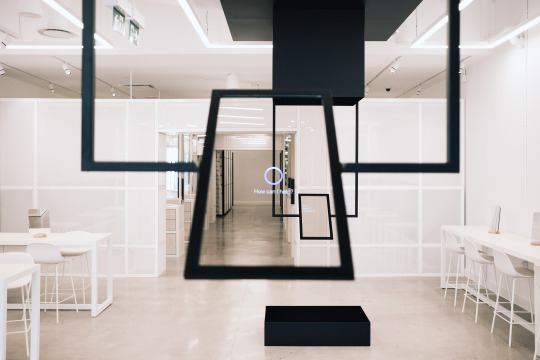 To control the display you use both your voice (the glasses have a microphone) and a 4-directional joystick called a Loop, which sits on your index finger like a ring and that you thumb. You can receive and send texts (voice to text), you can get turn-by-turn directions, you can view your appointments and the weather, and you can ask Alexa things.

The first step in the ordering process is a fitting. And that’s what I did over the weekend. The glasses are all custom made and so they start by doing a full 3D scan of your head in a room that feels like the future. Once that’s done, you pick what frame you want, the color, and your sun clips (an essential accessory for day drinking in Trinity Bellwoods). Total cost: CAD 1,299.

While exceptionally cool, it is premature for me to really comment on the tech at this point. I’m expecting my Focals in 8-10 weeks. But is it interesting to opine on the current state of eyewear tech.

Most people believe that the problem with Google Glass was the fact that you had to be a Silicon Valley nerd in order to want to wear them out in public. They looked and continue to look ridiculous, which is why Snap went fashion first with their Spectacles. I have always found this product really intriguing. I want to use it. But I’ve stopped using Snapchat entirely and I don’t really have a strong use case for them.

Snap’s Spectacles are about capture and content creation, whereas Focals are about discreetly feeding you information that you would otherwise have to pull out your phone (or watch) to view. There’s no camera on Focals. That’s not what they are about. But they are obviously fashion first.

The question for me is whether the experience will truly be seamless and integrated, or if I’ll still be disengaged – gazing off into my glasses (space) while I ask Alexa to UberEats me a chicken shawarma wrap. I’ll let you know in about 8-10 weeks. If you’re looking for more on Focals by North, check out their website and this CNBC piece. Go Canadian tech.