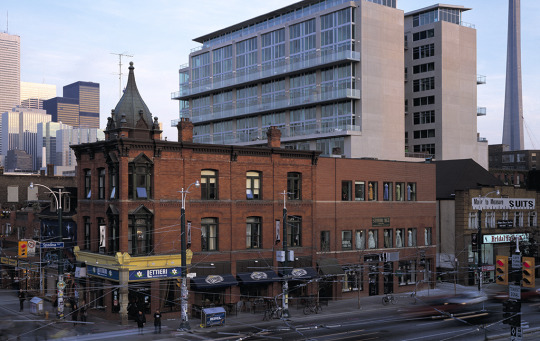 Howard Cohen was initially trained as an architect. But throughout his schooling he gradually became more interested in urban design and city planning. So after graduating in the late 1960’s from the University of Manitoba with a degree in architecture, he took a job within the planning department at the City of Winnipeg. There he helped to author the “Downtown Winnipeg Plan” and quickly earned the reputation as one of the most creative people in the department.

But after about a year and a half on the job, he decided that he wanted a change in scenery and so he quit and took off to Europe with his wife. Upon returning, with no money to his name, he managed to strum up two potential job opportunities; both of which were, thankfully, not in Winnipeg. One was an architecture job in New York City and the other was a planning position for a neighborhood on the east side of downtown Toronto known as Trefann Court.

Since planning had become more interesting to him than architecture, Howard decided to fly to Toronto for the job interview. He vividly remembers staying at the Sutton Place Hotel – which is today being converted to condos – and walking down Bay Street to City Hall for his interview. He also remembers being so nervous that he had to smoke a joint prior to, in order to calm his nerves. The interview was with the chief planner, deputy chief planner, and with local residents from the area. They offered him the job on the spot.

He accepted the position in 1970 and stayed at the City of Toronto until 1978. Howard was contemporaneous to figures such as John Sewell – the former mayor of Toronto who was also heavily involved in Trefann Court. Howard features prominently in John’s book: “How We Changed Toronto – The inside story of twelve creative, tumultuous years in civic life, 1969-1980.”

Interestingly enough, during his time at the City, some of the land use policies that Howard was championing were actually quite contentious within the development community. For instance, Howard believed that Toronto’s downtown residential neighborhoods – neighborhoods such as Cabbagetown – should be preserved, and not razed and turned into replicas of St. James Town. This is an outcome that I am sure most of us today now appreciate.

However, this is not to say that he was anti-development. Howard also firmly believed that high-density residential should be encouraged throughout the core of the city. We take this for granted now, but he remembers being called a zealot at an Ontario Municipal Board hearing because of his belief that people may actually want to live at the corner of Bay Street and Dundas Street. This was supposed to be a place for working and shopping, but definitely not living.

Towards the end of his tenure at the City, Howard had become for all intents and purposes the chief planner of Toronto. He was the guy. However, without the actual title he was starting to get restless and decided to look elsewhere for opportunities.

In 1972, the federal government formed a new Crown corporation known as the Harbourfront Corporation. This was after having expropriated over 100 acres of derelict industrial land along Toronto’s waterfront. The mandate was to revitalize the central waterfront, but after failing for 5 years to make anything meaningful happen, responsibility was ultimately turned over to local leadership.

Shortly thereafter, Howard left the City and became the first head of Harbourfront Corporation. As coincidence would have it, he was offered the position on the same day that David Crombie – who was mayor at the time – called him to formally offer him the role of chief planner. However, Howard felt that there were more exciting challenges at Harbourfront and so that’s where he went.

One of his first tasks at Harbourfront was to write the business plan that would set the course for the corporation and allow it to become self-sustaining. The model became about leveraging the value of the corporation’s land to not only create a thriving mixed-use community, but to also create a set of cultural institutions along the waterfront.

The legacy of Howard’s work can be found in the Power Plant Contemporary Art Gallery, the Harbourfront Centre outdoor skating rink, the Queen’s Quay streetcar, as well as a number of other initiatives ranging from cultural programs to development projects. Some of his development deals included the affordable housing built at Bathurst Quay, the Admiral Hotel, and the Queen’s Quay Terminal developed by Olympia & York – a pioneering mixed-use development that to this day serves as one of the most important anchors on Toronto’s waterfront. It was also through these development projects that Howard would increasingly get into the mindset of a developer – something that would obviously serve him well later on.

Despite being a financial success, Harbourfront Corporation was ultimately disbanded, partly due to controversy over some of the high-rise towers being developed along the waterfront. At this point, Howard was 44 years old and had spent his entire working career in the public sector. With the experience he had gained at the City and at Harbourfront Corporation, he decided that it was time to move over to the private sector and make some money. He went to work for a developer.

Howard landed at Murray Goldman’s development company – the Goldman Group – and would spend 4 years there as President. He didn’t necessarily have all the finance and marketing chops, but he did have a lot of other relevant experience. Perhaps his best known project of this era is the Castle Hill townhouse complex at the foot of Casa Loma.

After stepping down from the Goldman Group in the early 90’s, Howard then turned to consulting. This was a period of time when many in the industry were licking their wounds, but Howard managed to amass a diverse set of clients, including Innis College at the University of Toronto and the nascent Design Exchange. Initially hired as a consultant in 1992, Howard would later get asked to head up in the Design Exchange in 1994. He would spend 2 years in this role and raise over $7 million in donor money during one of the worst recessions in recent history.

As his consulting business chugged along, Howard would later reconnect with an architect by the name of Lloyd Alter. Lloyd had done some work for the Goldman Group when Howard was there and they decided to join forces and create a larger consulting business known as Cohen & Alter. Business was good for the two of them. They were busy.

They hadn’t really planned on getting into the development business, but then one day an agent came knocking with a small piece of land on Niagara Street. It was located in today’s King West neighborhood. Barbara Hall was mayor at the time and the city was starting to talk about new policies to open up “The Kings” to revitalization. “The Kings” being the two shoulders of downtown Toronto: King Street West and King Street East.

Toronto was still in a recession at the time and nobody wanted the site. It was also fairly non-consensus to think that people would want to live in these gritty old parts of downtown. Only zealots believed this to be true. So the agent told Howard and Lloyd that they could option the site for $1 – basically tie it up for free.

This was the birth of 20 Niagara.

Since the recession had also left architects without work, they managed to get Peter Clewes (today of architectsAlliance) to defer his fees on the project. The deal was that when the project got off the ground, everyone would get paid. It was the ultimate in bootstrapping.

Around this same time, Howard and Lloyd met Tom Schwartz, who would become a kind of mentor and advisor to the aspiring developers. Tom, who today is the President and CEO of CAPREIT, was already a successful developer through the founding of Intraurban Projects in 1976.

Tom introduced Howard and Lloyd to a company called Equivest, which was owned by Gerry Schwartz (of Onex fame) and Stephen Gross. Equivest would become the financial backer for their fledgling project and set the stage for a go-forward funding model.

Howard and Lloyd would also turn to a guy named Brad Lamb to sell the project. Brad had just started his own brokerage after working under Harry Stinson – a real estate broker turned developer who is perhaps best known for his cheesy late night infomercials. Brad had two employees at the time and would go on to personally sell 20 Niagara Street.

The project contained 30 condo units and was about 40,000 square feet. It took a year to sell the first 20 units – at some absurdly low price – and ultimately didn’t make any money for both Howard and Lloyd. Howard would spend the next two projects paying back the hangovers from 20 Niagara. It did, however, give birth to Context Development.

Howard and Lloyd ended up parting ways after 20 Niagara, but the partnership of Howard Cohen, Stephen Gross, and Peter Clewes would go on to build some of the most design-forward and contextually sensitive projects in the city. The core philosophical beliefs were that housing of every varietal belongs downtown and that modern architecture has a place in the mass market. Again these principles may seem obvious today, but they weren’t as obvious in the late 90’s.

Context Development would later develop adaptive reuse projects such as the Kensington Market Lofts and the Tip Top Lofts, award winning projects such as the Mozo, and wildly innovative projects such as the District Lofts (pictured above). This 14-storey “twin tower” condominium used Le Corbusier’s “skip-stop” system to create two-storey through units. Context would also go on to develop two buildings that I have personally called home – one of which I am sitting in right now as I write this post.

For me, the story of Context has always had a particular resonance. As a trained architect who then entered the development business, Howard’s story showed me that I too could leave the world of architecture and do something positive for cities. He was a significant inspiration for me early on in my career when I was figuring out which path I wanted to take.

Every developer brings their own background and sensibilities to their projects. And in the case of Howard’s projects, I know that Toronto is a better city because of it. Thank you, Howard.

This is the third post in my blog series called BARED (Becoming A Real Estate Developer). If you’d like to be featured in this series, send me an email or tweet me. The links are at the top of this page. Also, email subscribe to this blog to stay in the loop.