Henry Grabar has an interesting piece in the March 2016 issue of The Atlantic talking about Paris’s ambitious metro expansion. By 2030, and after $25 billion of investment, the Paris system will gain four new lines, 68 stations, and more than 120 miles (192 kilometers) of track.

To put this into perspective, this additional track length is roughly equal to Toronto’s entire subway and streetcar network, including all under construction and approved lines.

But the real focus of Grabar’s article was on how this transit investment will really stitch Paris back together:

“Three of the new lines will run north and east of Paris, through Seine-Saint-Denis, the poorest of the 96 departments in France. Among French cities with at least 50,000 people, six of the seven with the highest percentage of foreign-born residents are in Seine-Saint-Denis. Residents of Clichy-sous-Bois, where the riots that swept the region in 2005 began, will for the first time find central Paris within a 45-minute train ride. The town of Saint-Denis, the site of the standoff between police and the terrorists who struck Paris in November, will be home to the project’s largest train station. Designed by the Japanese architect Kengo Kuma, the junction is expected to handle 250,000 passengers a day.”

Below is a map (from the same article) showing the location of Clichy-sous-Bois to the east of Paris and the area reachable within 45 minutes from this suburb, both today and in 2030 when the new metro lines open. 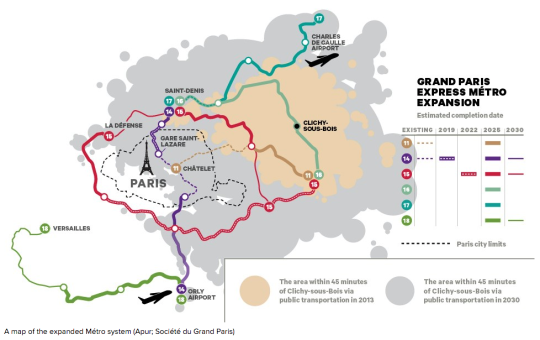 Having traveled to Paris in 2006, shortly after the riots took place, I remember some Parisians telling me that this was not a Paris problem. They told me that this was a problem of the banlieues, but not of Paris. Seeing how separate Clichy-sous-Bois is today, that is probably how it felt to some or most. But based on the above, the Paris region is about to be stitched together.

What I love about Grabar’s article is this idea that transit and connectivity represent a kind of citizenship for urban residents. And that even today, in our hyper connected world, physical access matters a great deal. Because without it, you might be out of sight, out of mind.

On that note, here is how the article ends:

Benoît Quessard, an urban planner for the local government, told me that he sees the expansion as not merely “an economic wager but also a social one.” In this sense, it will test an old Parisian belief about the Métro conferring, beyond convenience, a kind of citizenship on its riders. In 1904, four years after the first line opened, the writer Jules Romains predicted that the system would be a “living, fluid cement that will succeed in holding men together.”