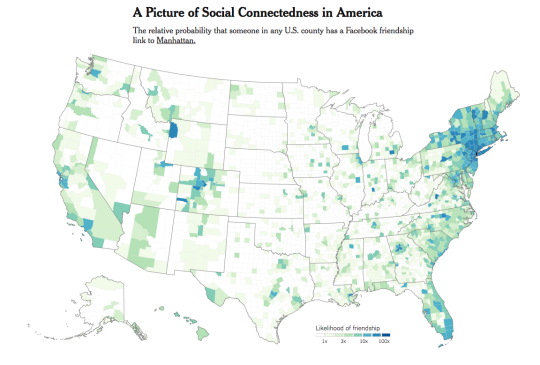 Economists at Facebook, Harvard, Princeton and NYU recently analyzed anonymous Facebook data in order to study our social connectedness. The New York Times’ Upshot wrote about it here and it is a must read.

There are a number of interesting takeaways from the study. One of them is that geography, distance, and political boundaries actually matter a great deal when it comes to our connectedness.

In other words, Americans are more like to be connected to someone nearby – within county or state boundaries – than they are to someone further away who may be infinitely more similar. This may seem somewhat intuitive.

But at the same time, having a dispersed network also suggests certain things. Here’s the relationship that they discovered:

These networks are important in part because of other patterns that are correlated with them. Counties with more dispersed networks — where a smaller share of Facebook friends are located nearby, or among the nearest 50 million people — are on average richer, more educated and have longer life expectancies. Places that are more closely connected to one another also have more migration, trade and patent citations between them.

Counties that are more geographically isolated in the index are more likely to have lower labor force participation and economic mobility, and they have higher rates of teenage births. Some of the most economically distressed parts of the country appear to be the most disconnected: Among the 10 U.S. counties with the highest share of friends within 50 miles, six are in Kentucky.

Again, it is worth checking out the full article. There’s also an interactive map to play around with.