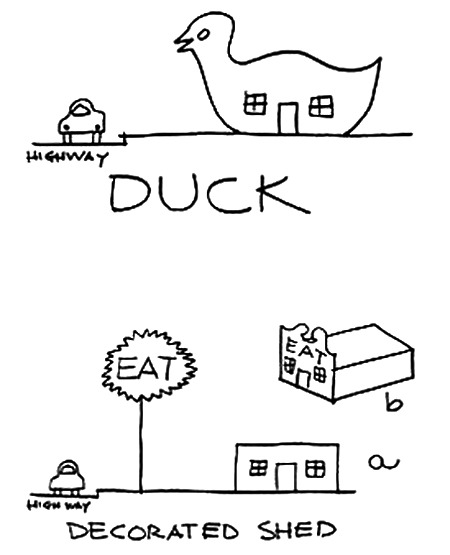 Architect Robert Venturi died this week at his home in Philadelphia. He was 93. Here is his obituary from the New York Times.

Robert Venturi was, along with his partner and wife Denise Scott Brown, a central figure in 20th century American architecture. He is often referred to as one of if not the father of postmodernism. But apparently he wasn’t too keen on that moniker.

Venturi is famous for writing both “Complexity and Contradiction in Architecture” and “Learning from Las Vegas”. But his firm also employed somewhere around 100 people at its peak.

Venturi was critical of modernism for its hatred of ornament and for its purist belief that “less is more.” He argued that decoration had long been used in architecture to convey meaning, hence the response: “less is a bore.”

Out of his work in Las Vegas came the notable comparison between a “duck” and the “decorated shed.” See above. The duck is modernism. The building itself becomes the symbol. No ornament is needed.

The decorated shed, on the other hand, uses signage and other ornament to convey its symbolic qualities. The building itself can then be fairly nondescript, which also makes it flexible to a variety of different uses.

This decorated shed approach is what guided the firm’s work and in 1991 he was awarded the Pritzker Prize in Architecture.

I love that he tried to have the award go equally to his partner Denise Scott Brown. The jury declined his request but he still used “we”, instead of “I”, throughout the entirety of his acceptance speech. Good.

Thank you, Robert Venturi, for all of your contributions to architecture, as well as to the University of Pennsylvania.