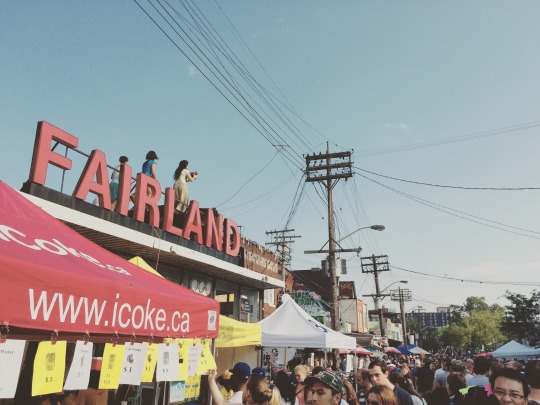 This past Sunday I spent part of the afternoon in Kensington Market (Toronto) for Pedestrian Sundays.

If you’ve never been to a Pedestrian Sunday, you’re missing out. The entire neighborhood – which happens to be a National Historic Site of Canada – gets closed to cars, and filled with street vendors, musicians, bands playing on roofs (see above), and so on. It’s pretty wild. And it feels very Toronto to me.

It happens the last Sunday of the month from May to October. But every time I go I wonder why the area isn’t this way more often or even all the time. It’s a natural candidate. But after 12 seasons of Pedestrian Sundays, it still hasn’t happened. It’s only 6 days throughout the year.

I remember being in a meeting early on in my career when I brought up the idea of a pedestrian mall in Toronto for a project I was working on. And I got completely shut down. I was told they don’t work here in our climate and that we should just forget about it. I was told to look at the failure of Ottawa’s Spark Street Mall.

But I’m still not convinced that’s the case. In fact, I feel even stronger at this point that it could and would work in Toronto. I’ve been to the Distillery District in the dead of winter for the Toronto Christmas Market and I could barely move because of all of the people.

Acknowledging climate is important. But it shouldn’t become an excuse for not doing things.