The world is increasingly spiky. Inequality is growing and it is increasingly geographic in nature. We know that people tend to make more money in urban areas compared to rural areas – even when they possess the exact same level of education. The returns to being smart and educated are simply greater in cities.

But they also depend on the size of the city. Mark Muro and Jacob Whiton of Brookings recently published data looking at labor market performance – by metro size – from 2009-2015 (right after the financial crisis). What they found is that larger metropolitan areas simply performed better than smaller ones. 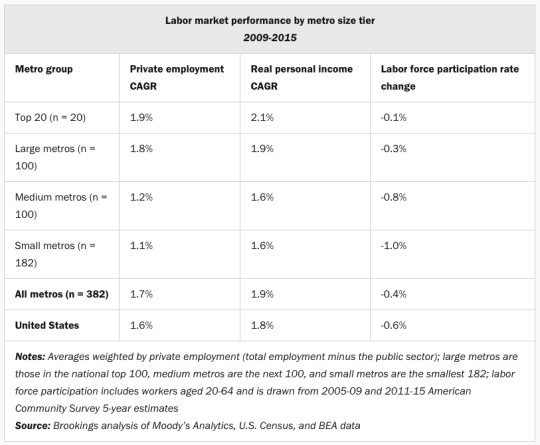 City size matters because it’s a major influence on city prosperity and adaptability as well as local worker fortunes. Bigger cities are more productive. They are more innovative. They draw better-educated workers by offering higher wages.

The situation is even more pronounced across the pond. According to the New York Times (quote from Richard Florida), a third of Britain’s gross domestic product comes from London alone.

What is far less clear is what should be done to address the decline of some of the smaller cities in America – cities that are stagnating and feeling left behind. But perhaps the first step is acknowledging what has happened and what remains feasible in today’s global economy.

Here is another quote from the above NY Times article:

Mr. Trump’s promise to relieve the pain by reviving the coal and steel industries, by keeping immigrants out of the country and by raising barriers against manufactured imports is only a rhetorical balm to satisfy an angry base seeking to reclaim a prosperous past that is no longer available.