“It’s remarkable that even as the internet disperses information and enables us to form online communities across great distances, our politics are still highly correlated with physical environments. Who we are is largely defined by where we are. For architects and urban designers, this is an important reminder that space is and always has been political, from the days of the valley section to the postmodern stage of Trump.”

The above excerpt is from a Places Journal article by Neeraj Bhatia called, Environment as Politics. The premise of the article is that residential population densities have long shaped political outcomes and that that was certainly the case in the 2016 U.S. presidential election.

But before we get into the work and drawings of Places Journal, let’s first talk about one of the inspirations mentioned in the article. In 1909, the pioneering town planner Patrick Geddes drew the following “Valley Section”:

The point of this section drawing is to make clear the relationship between humans and their environment. In this case, it speaks to occupation. The physical geography of where you lived determined what you did: fish, hunt, mine, and so on.

For those of us now living in cities, these “natural occupations” may not seem all that relevant. But that same human-environment relationship remains. 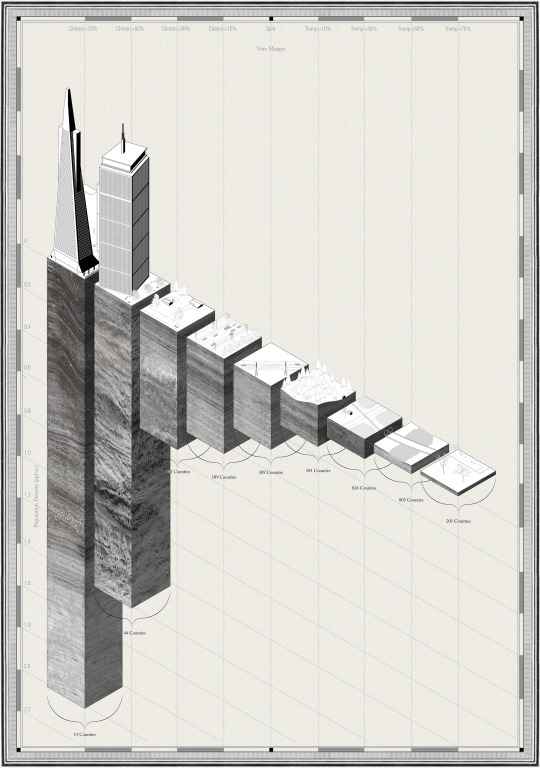 Below is a chart from Places Journal that plots the 2016 election results for all U.S. counties: 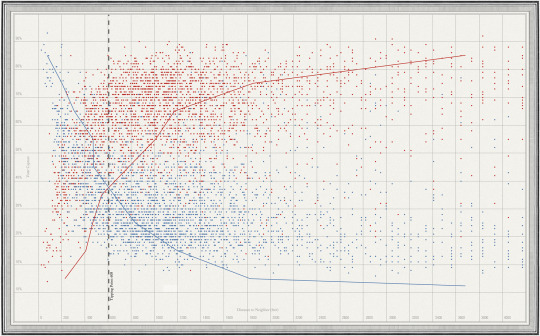 On the y-axis is “vote capture” by Democrats and on the x-axis is “Distance to Neighbor (feet).” What you see here is a dramatic drop off in liberal voting as distance to neighbor increases. And the tipping point appears to about 608 feet.

Part of the explanation for this is that living in close proximity to others change how we feel about others. It can reduce fear and prejudice. In other words, it makes us more open. And as Bhatia points out in his article, one could argue that this last U.S. election was in fact a “clash over the openness of society.”

We often talk on this blog about how space impacts our lives. As Jan Gehl once said: we shape cities and then cities shape us. Today we are reminded that space is also highly political.

In my case, the distance to my neighbors is likely about 8-10 inches. Sometimes I can hear somebody sneeze. But most of the time I don’t hear anything at all. It’s usually pretty quiet around here. Whether I acknowledge it or not, this distance is shaping me and how I see the world.