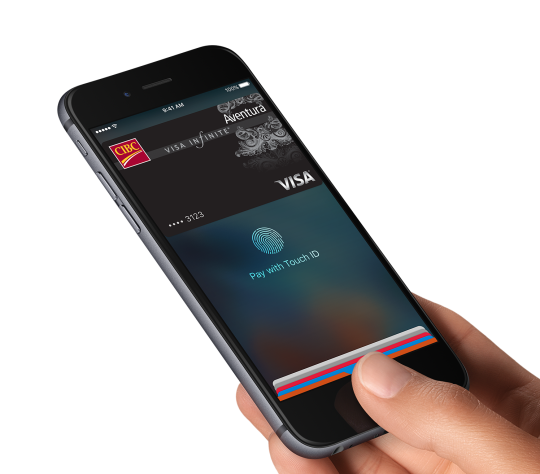 Today I am one step closer to not only going cashless, but also going walletless.

This is going to be old news for those of you in the U.S., but yesterday, all 5 of Canada’s big banks signed on to Apple Pay. Before yesterday, you had to have an American Express credit card – which I do not have – to use Apple Pay in Canada. Now you can use a debit and/or credit card from these institutions.

What’s great about Apple Pay is that it can be used anywhere that contactless, or tap, payments are currently accepted. And since this is pretty commonplace in Canada – more so than in the U.S. I think – Apple Pay can, at least in theory, be used almost anywhere.

Being the early adopter and geek that I am, I went out for lunch today determined to test out Apple Pay. As I pulled out my phone to pay for lunch, the guy told me: “That’s not going to work. Other people have tried before.” But I tried anyway and, boom, it worked like magic. The transaction amount popped right up on my screen.

I am pretty excited about this for a couple of reasons.

Firstly, it’s more secure. Apple Pay works in tandem with the iPhone fingerprint scanner. So even if I were to lose my phone, nobody would be able to charge anything to it. That’s not the case with a lost wallet. Anyone can tap a credit card to buy something.

Secondly, Apple is working on allowing reward cards to be stored in its Wallet app. I am terrible about remembering to collect rewards and use gift cards, so anything that consolidates and simplifies is a positive in my view.

Thirdly, I like to go to the gym and go cycling with just my phone and headphones. I don’t like carrying around my wallet. I’m always afraid that I might lose it or someone might steal it from a locker. So I try and leave it at home. Now I can do that and still pay for stuff – assuming my battery will last that long.

Of course, it’ll be awhile until we can all really go walletless. I’m not aware of any significant push to digitize government IDs. But it will happen. (Does that mean there will be no more fake IDs for underage drinking?)

As this transition happens, I can’t help but think of all the small businesses that only accept/use cash and probably hide some of their earnings. I suspect it’s going to be a lot harder to do that in the future.

I’m also thinking about how transit agencies are going to have to quickly get onboard with this technology. Here in Ontario, we’re still rolling out a card-based payment system. And cards are about to disappear; perhaps sooner than most people think.