People often ask me about “my background”. When I’m feeling cheeky, I usually just say that I’m Canadian or that I was born in Toronto (because that’s what I culturally self-identify with). But that’s not what most people want to hear.

The short answer I usually give is Eurasian (European + Asian) or Chirish (Chinese + Irish). Although I recently learned that Chirish means something else to people from Chicago.

But now, thanks to 23andMe’s DNA test, I can give a much more specific answer. Here’s the full chart: 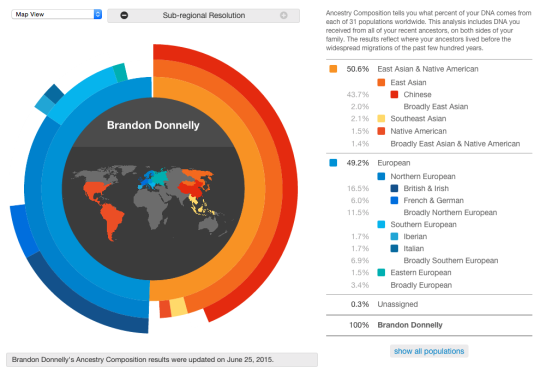 But the interesting thing is that I don’t really feel any cultural affinity towards any of the regions or countries listed above (except for maybe France since I grew up going to a French school based off the French schooling system). For me, I identify as being Canadian. That’s more than enough for me.

What’s your “background” and how do you self-identify? I think this is an interesting discussion given that we are now an incredibly mobile world. What your DNA says and how you feel about yourself, could be two totally different things.