We have a cultural bias toward homeownership in this country. Other countries have it too. We believe that homeownership is what you should aspire to.

In 2011, Statistics Canada pegged the homeownership rate at 69%. 9.2 million households out of a total of 13.3 million. Other more recent data suggests that it’s probably a bit lower, though still higher than that of the US since the financial crisis.

Regardless, more owners than renters.

I am not here to throw stones. I get it. I own my home. However, I do think it’s important to put this into perspective. Below is a chart from Trading Economics of homeownership rates in the G20: 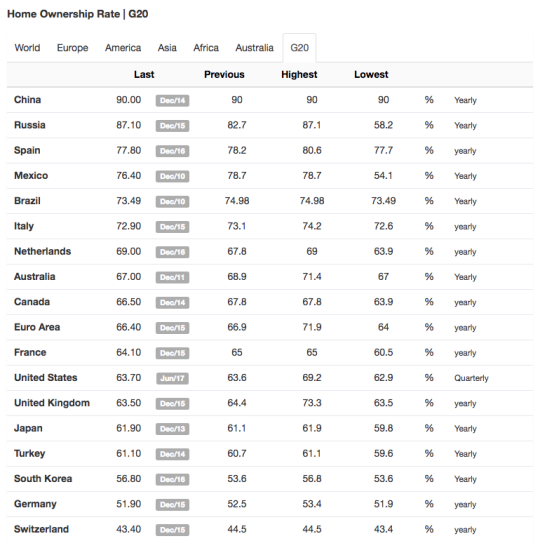 At the bottom of the list – with the lowest homeownership rates – are Germany and Switzerland. Germany appears almost evenly split between owners and renters. And Switzerland is more renters than owners.

Both of these countries are wealthy. Both have a higher GDP per capita than that of Canada according to the World Bank and the International Monetary Fund.

Anecdotally, I can also say that some of the wealthiest people I know have made the decision to rent. They have simply decided to invest their capital elsewhere.

I’m not trying to insinuate any sort of correlation with these statements, but I am trying to draw attention to a cultural bias.