Eduardo Porter recently published this piece in the New York Times on the “relentless economic decline” of small-town rural America. We often talk about rising income inequality, but the greater concern is the alarming rate of joblessness in many of these communities. Earning less than others is not as bad as earning nothing.

I think the below map from the article, depicting population density by county, starts to show how uneven the economic landscape is across the US. Porter puts it this way: “This is the inescapable reality of agglomeration, one of the most powerful forces shaping the American economy over the last three decades.” 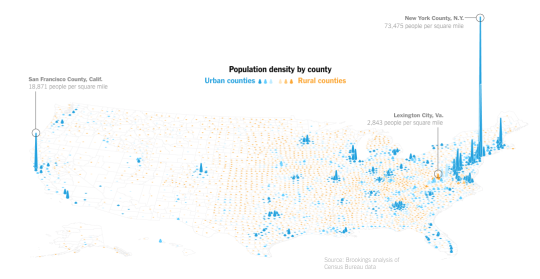 But, of course, we don’t really have a solution to this problem. Some are suggesting employment subsidies, such as the earned-income tax credit. While others are suggesting that we need to make it easier to build in the large blue spikes shown above. That way we’ll be able to more affordably accommodate the people who will ultimately need to move from rural to urban.

While this latter suggestion may seem grim for small-town America, it is perhaps a reminder of what cities really are at their core: Cities are labor markets. They are the places where people come to get a job and make money.