French photographer and graphic designer François Prost has a new photo series out that I thought I would share with you today. It’s called “Paris Syndrome” and I discovered it via CityLab.

What the series does is visually compare Paris to a housing estate in Hangzhou, China called Tianducheng, which was designed to be a replica of Paris. Tianducheng even has its own Eiffel Tower, though this Chinese version is only 108m tall and the French original is 324m. 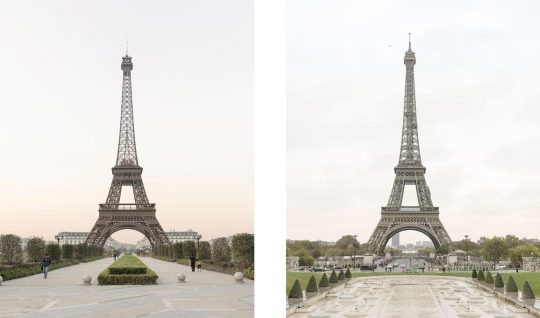 Still, in many of François’ photos, you may find it difficult to distinguish between the two (provided you ignore the Chinese people and the Chinese signs). The neighborhood was initially a ghost town, but apparently it’s now starting to fill up.

The reason I mention this photo series is because it reminded me of the day that I spent in Macau last week. I’m not much for gambling – and Macau is firmly the gambling capital of the world with revenues that greatly exceed Las Vegas – but I was curious to see it.

Similar to Hong Kong, Macau is a Chinese Special Administrative Region with a lot of autonomy. But from 1557 to 1999 it was under Portuguese administration. And so historically it has been home to this very unique Eurasian culture spanning everything from food to language.

I say “historically” because the Macanese and their Patuá language – which is supposedly a blend of Portuguese, Cantonese and Malay – seem to be on the brink of extinction.

Today it’s all about the casinos. And the demand is firmly coming from mainland China. In 2016, 90% of Macau’s 31 million tourists came from there.

I fully appreciate the demand drivers, but I struggle to understand the allure of replicating and bastardizing attractions from other places. Macau also has an Eiffel Tower, as well as a Venetian (like Las Vegas). You can go for gondola rides in its canals.

The more interesting part for me was the historic center of Macau with its Portuguese paving on the sidewalks. But maybe that’s just me.