The Douglas House by architect Richard Meier was just designated by the National Register of Historic Places. The house was originally designed in the late 1960s for Jean and Jim Douglas of Grand Rapids, Michigan. But it was more recently restored by Marcia Myers and Michael McCarthy. They purchased the tired property in 2007 and apparently had architecture professors knocking on their door shortly thereafter.

Here is a beautiful photo (via Curbed) by James Haefner courtesy of the Michigan State Historic Preservation Office: 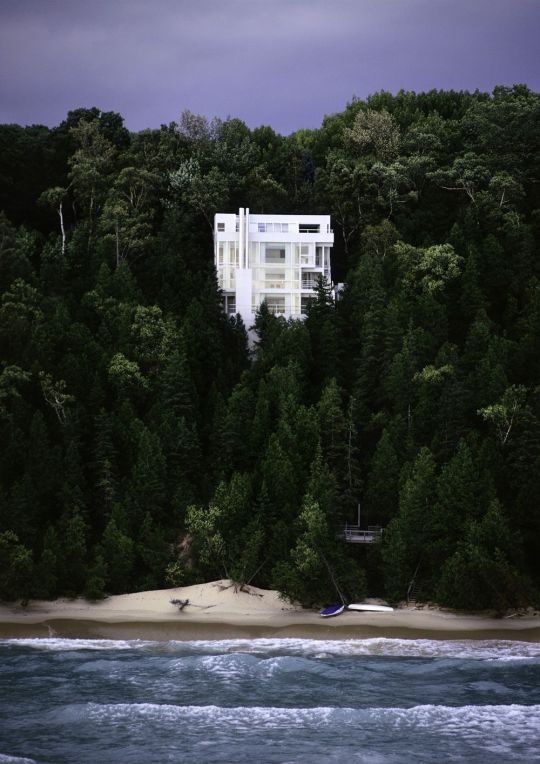 I love the positioning of the house within the landscape. In fact, it’s built into such a steep slope that you actually enter the house at roof level via a bridge. However, once inside, you’re then able to look down to the living and dining areas, as well as out to the sundeck overlooking Lake Michigan.

Interestingly enough (according to designboom), the Douglas family had originally purchased a lot for their new home in a residential subdivision. But when the developer of the subdivision prohibited them from working with a stark Modernist like Richard Meier (those damn developers), they decided to sell the lot and look for something else. Above is what they ultimately decided on.

I’m glad they stuck to their guns. Otherwise this house probably wouldn’t exist today. And that would be a shame. I’ve always liked the work of Richard Meier. It’s always white and minimal and I like white and minimal. Simplicity can be surprisingly difficult to achieve. As the saying goes: “If I had more time, I would have written a shorter letter.”