Bloomberg recently published a good summary of Zillow’s business and their move into algorithm home buying and flipping. (They are trying to avoid the “flipping” moniker because of the negative connotations associated with it.)

Zillow started buying homes directly from owners last spring. They charge the seller between 6-9%, so more than using a typical agent, but inline with their competitors. There’s clearly a segment of the market willing to pay a premium for the added convenience.

The thinking used to be that discount brokerages were the way to disrupt the housing market. This is the opposite strategy.

Interestingly enough, Zillow felt that they needed to make this pivot with their business model. It used to be about selling ads. They were definitive in that they were not a disruptor of real estate agents.

If getting an offer from an iBuyer became a crucial step in the selling process, they worried, Zillow could lose its audience and its advertising base. What’s more, market researchers kept finding that consumers said they’d pay a modest premium to get a cash offer. “People expect to press a button and have magic happen,” says Rascoff, a 43-year-old former Expedia executive who’d earlier started the travel search engine Hotwire, which he sold to Expedia for $700 million. Getting into the business of buying homes directly, Rascoff says, was “the only way to remain in a leadership position.”

Here is a map of the companies in this particular space and the cities in which they operate: 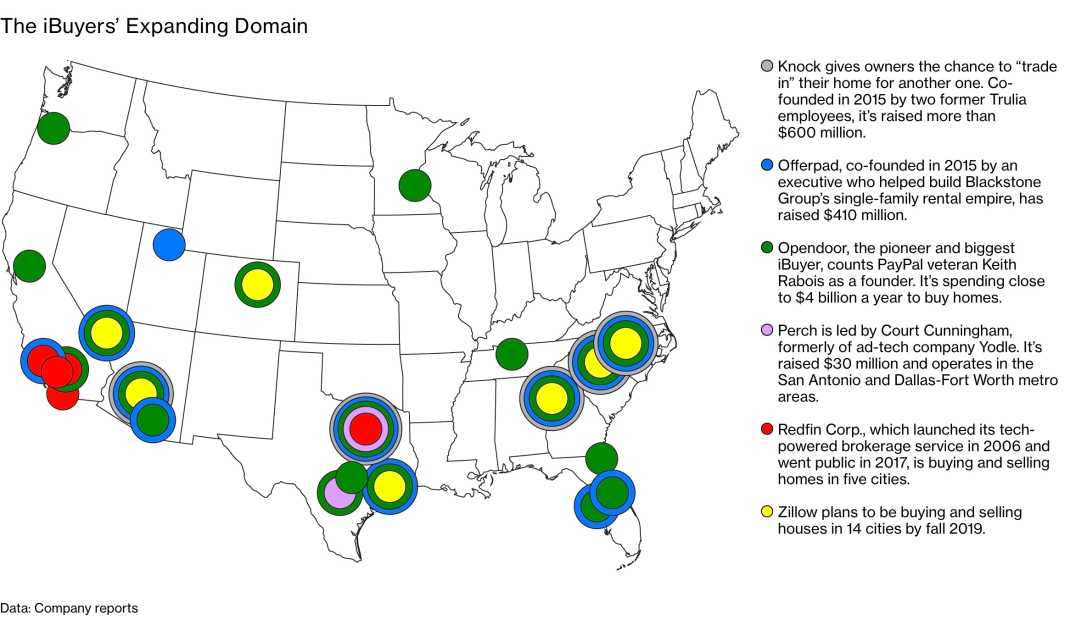 Some investors aren’t sold on this strategy and have begun short selling Zillow (according to the Bloomberg article). I keep getting the sense that there’s a greater end game in the cards here. It is about building up A (algorithmic home buying and flipping) in order to unlock B.

But what’s B — a new end-to-end transactional model for the housing market?