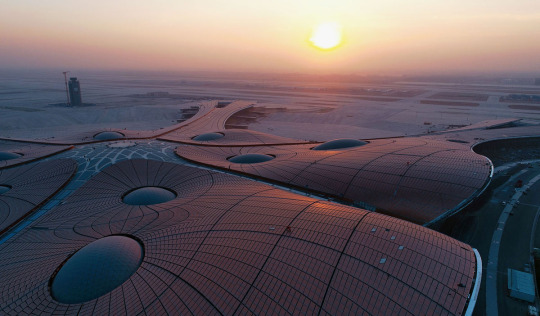 I just finished scrolling through these photos (from the Atlantic) of Beijing Daxing International Airport, which is currently under construction about 46 kilometers south of Tiananmen Square. The first phase is expected to open in the second half of this year. It will be about 7.5 million square feet and be capable of handling some 72 million passengers per year (100 million at full build out).

Supposedly all of this will make it the largest airport in the world, which is pretty impressive considering Beijing Capital International Airport is already one of the busiest in the world. It too moves around 100 million passengers a year and is likely to overtake Hartsfield-Jackson Atlanta in the near term (if it hasn’t already).

But in addition to being the biggest and baddest, two other things stand out to me about the design of Beijing Daxing.

The first is its starfish design. This was done to minimize the amount of walking between security and gate. Check-ins happen in the middle of the starfish and then the most you’ll ever have to walk is 600m (to end of one of the limbs). That’s in line with what most people would consider a reasonable urban transit radius.

The second is the fact that the check-in area provides an aerial view of the gates below. You can see this layering in the photos from the Atlantic. This was done to create a visual connection between passengers and their family and friends. Usually, the goodbye waves happen at or before security. Here you get a bit more time. (Will security be an issue?)

For the full set of photos from the Atlantic, click here. I have a thing for airports, so I thought this was a great set.

Image: Wang Mingzhu via the Atlantic