In Edward Glaeser’s book, Triumph of the City, he argues that the average temperature in January is the single best variable to predict which U.S. cities have grown the most over the last century. Indeed, from July 2015 to July 2016, 10 of the 15 fastest growing large metro areas in the U.S. were in the south. Follow the sun and sprawl.

Given this phenomenon, I thought it would be interesting to look at the world’s most influential cities (i.e. global cities) through this lens. Because let’s face it, New York and London aren’t all that warm in January. 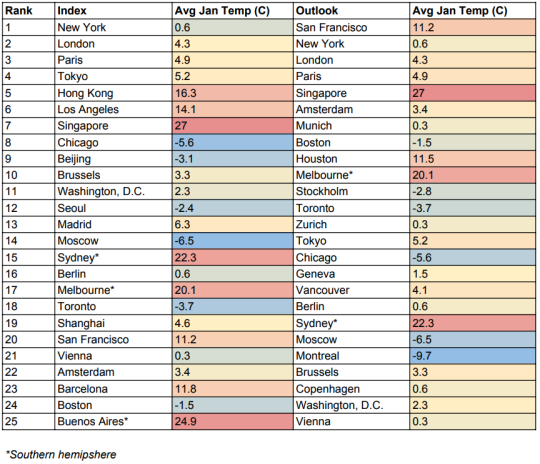 First of all, it’s interesting to see San Francisco jump so significantly in their outlook ranking. This has everything to do with tech and innovation. It’s also important to note that a handful of the above cities are located in the southern hemisphere, so “average January temperature” doesn’t mean the same thing (probably should have normalized to their winter).

Montreal wins the award for the coldest city in this ranking. And there’s really only one city, Singapore, with a tropical climate. Though there are others, such as Hong Kong and Sydney, that would fall under subtropical. All of this isn’t enough for us to start inferring anything, but perhaps colder and more temperate climates aren’t such a bad thing for economic growth.