I was at the St. Lawrence Market over the weekend and I saw a poster up for the original Yonge Street Arcade building, which was located at Yonge Street and Temperance Street here in Toronto. Initially constructed in 1884, the building was ultimately demolished in 1952 and replaced with today’s building by 1960.

Here is a photo of the original arcade dated 1885: 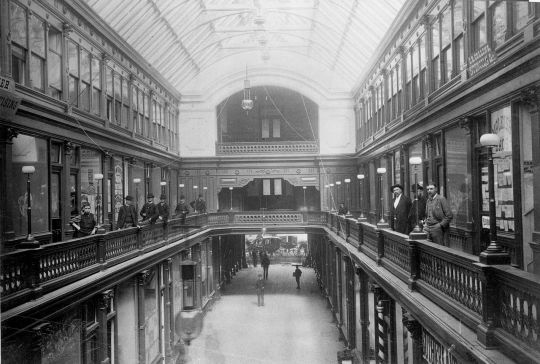 The Yonge Street Arcade has been fairly well documented online (check out here and here). But what interested me when I saw the poster was the building’s retail characteristics.

Modeled after the glass-roofed malls being constructed in Europe at the time – the Galleria Vittorio Emanuele II opened in Milan in 1867 – the Yonge Street Arcade is said to be Canada’s first enclosed shopping mall.

The galleria was 267 feet in depth and 3 storeys high (pictured above). The ground floor contained 32 retail units, each 12 feet wide by 29 feet deep. 24 of the units were in the galleria and the other 8 faced outward toward each street frontage.

Either way, the mix of uses is interesting (and maybe a first for Toronto). And if you know anything about retail, you’ll know how difficult it can be to successfully pull it off across multiple levels. The Yonge Street Arcade shows that we’ve been (possibly) trying it for well over a hundred years in this city.