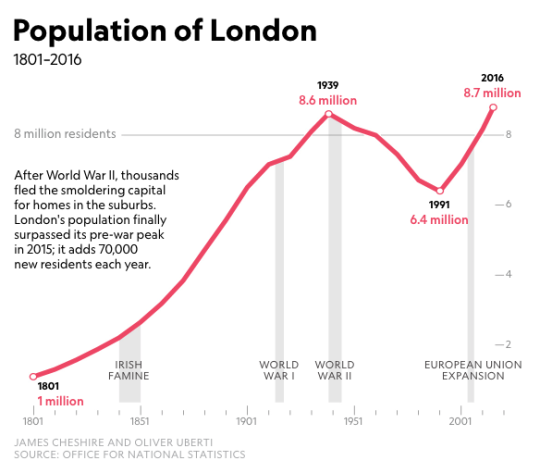 Some of you may want to debate the “center of the world” title (New York may be more deserving), but Laura Parker of National Geographic recently published a great essay describing the tremendous growth that London has seen over the last 30 years thanks to in part the deregulation of the financial services industry. Here is an excerpt:

As the manufacturing industry splintered, the docks of what was once the world’s largest port fell victim to shipping modernization and closed. The death in 1965 of Winston Churchill, the great prime minister, marked “the last time that London would be the capital of the world,” the Observer noted. Population continued a downward slide, bottoming out at 6.7 million in 1988. By then London’s fortunes had changed with deregulation of the financial services industry, known as the Big Bang, along with the shift to electronic trading, which enabled London to rival Tokyo and New York. A new financial district rose on the ruins of the West India Docks on the Isle of Dogs, a marshy nub that juts into the Thames. Canary Wharf, as the district is called, became London’s first modern large-scale regeneration project.

According to National Geographic, London’s population grew by about 1.2 million between 2006 and 2016. That’s a pretty incredible number and is why the city estimates that they need about 66,000 new housing units a year just to keep up the growth. Like many supply constrained big cities, they’re not meeting that target.

For the full essay, click here. It comes packaged with some incredible photographs by Luca Locatelli.