What is happening in California right now is both sad and scary. I woke up to these photos in the New York Times. So I spent the morning reading up on wildfires and what causes them.

I am sure many of you are thinking: Is climate change doing this?

It’s important to note that California is designed to burn. The characteristics that make the state a highly desirable place to live – mild winters and hot and dry summers – also make it a highly flammable place.

Below is a map from Popular Science showing how much of California has burned over the last 5 years. Most of California’s hottest fires (13 of the top 20) have occurred since 2000. 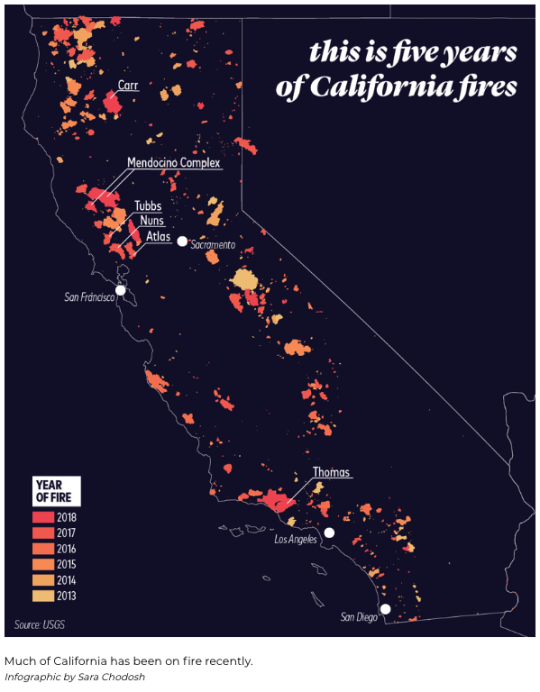 But these naturally occurring fires are actually important for the regeneration of its forests. So one argument is that the current policy of “total fire suppression” is actually partially responsible for this increase in severe wildfires.

Low-intensity forests aren’t burning like they used to and it is creating more densely packed forests for even larger wildfires. In other words, through our actions we could be exchanging smaller and more frequent fires for bigger and more severe ones.

The other concern is development.

California had a population of about 24 million people in 1980. Today it is closer to 40 million. And much of that growth has occurred outside of existing urban areas (too hard to build). This has meant more people living in suburban and rural areas – adjacent to wildlands.

Ed Glaeser has repeatedly argued that the best way to respect nature is to actually stay as far away from it as possible. Humans are a destructive species. Living in a dense city is good for the planet.

Daniel Swain, who is a climate scientist and author of the Weather West blog, published this popular thread on Twitter about a day ago. At the time of writing this post, it had been retweeted and liked over 10,000 times.

From his perspective as a climate scientist, this is not all about climate change. That’s the wrong question to ask. It’s more complicated and nuanced than that. But climate does indeed act as a “threat multiplier” to the other factors we’ve already discussed.

Fire season typically begins and ends with rain. When the fall rainy season starts, the fire season ends. One of the biggest risk factors is a dry fall, particularly after a hot and dry summer (or after multiple hot and dry summers, as has been the case in California).

Because according to Swain, fall means the start of “offshore wind” season, which can help to stoke these wildfires.

Unfortunately, one of the projected outcomes of climate change for California is more precipitation concentrated in the “winter” months, at the expense of precipitation in the shoulder seasons (spring and fall). So that means a longer fire season.

Swain believes that if Northern California had received close to its typical amount of rain this fall, it is almost certain that this tragedy would have been avoided.

That, however, makes me wonder about the relative importance of all the factors we have discussed today.