One of the challenges that self-driving vehicles present is not about technology per se, it is about ethics. The typical example scenario is this one: If a pedestrian were to step out in front of an autonomous vehicle illegally, should the car be programmed to hit the pedestrian or veer off the road at the risk of potentially harming its passengers?

Safety and statistics aside, in turns out that the answer to the above moral question could depend on where you’re from. Nature recently published what they are calling the largest ever survey of “machine ethics.” And out of this survey they discovered some pretty distinct regional variations across the 130 different countries that responded.

The responses were able to be grouped into 3 main buckets: Western, Eastern, and Southern. Here is the moral compass that was published in Nature: 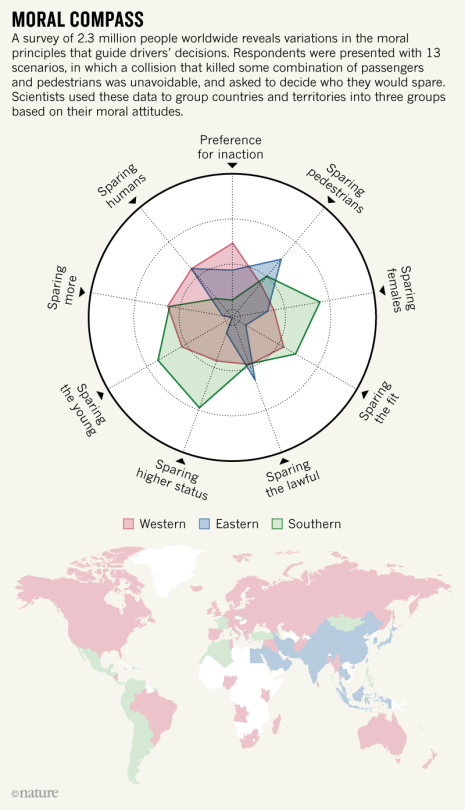 And here are a few examples. In North America and in some European countries where Christianity has historically dominated, there was a preference to sacrifice older lives for younger ones. So that would guide how one might program the car for the case in which a pedestrian steps out in front.

In countries with strong government institutions, such as Japan and Finland, people were more likely to say that the pedestrian – who, remember, stepped out onto the road illegally – should be hit. Whereas countries with a high level of income inequality, often chose to kill poorer people in order to save richer people. Colombia, for example, responded this way.

Also interesting is the ethical paradox that this discussion raises. Throughout the survey, many people responded by saying that, in our example here, the pedestrian should be saved at the expense of the passengers. But they also responded by saying that they would never ever buy a car that would do this. Their safety comes first in the buying decision. And I can see that.

There’s an argument that these are fairly low probability scenarios. I mean, the last time you swerved your car, you probably weren’t driving on the edge of a cliff where any deviation from the path meant you would tumble to your death. But I still think that these are infinitely interesting questions that will need to be answered. And perhaps the answer will depend on which city you’re in.