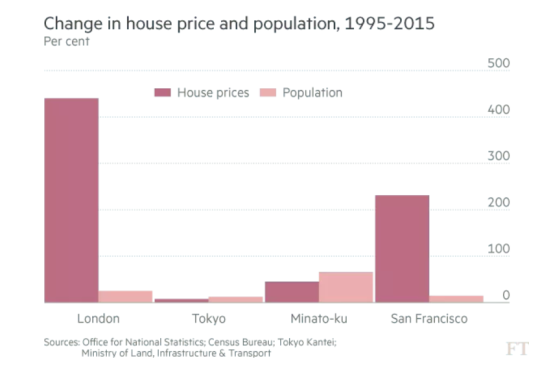 There’s a debate among urbanists as to the full impact of housing supply on overall affordability. But it should make intuitive sense that as new people move to a city and as new jobs are created, there will be a need for additional housing. Here is an excerpt from Vox citing a recent FT article talking about how Japan may have figured out the solution to rising home prices:

The reason, argues Financial Times writer Robin Harding, is that Tokyo does a better job of allowing housing supply to keep up with housing demand. In 2014, Tokyo issued permits for 142,417 new housing units. In contrast, the entire state of California — which has three times the population of Tokyo — issued permits for only 83,657 new housing units. Little wonder that demand for housing has outstripped supply in the Bay Area.

In the United States, local housing markets are plagued by grassroots “Not In My Back Yard” (NIMBY) activists who organize to stop efforts to build town homes and apartment buildings in their local neighborhoods. Because every construction project is located near somebody, the result tends to be that little housing gets built anywhere.

I don’t have a copy of the FT article and I do firmly believe that supply matters a great deal, but I think there are also a number of other factors that need to be taken into consideration here. Japan has a depopulation problem. The country has lost about 1.4 million people since 2010.

They also have fairly insular views around immigration. They are over 3.5x larger than Canada in terms of population and yet they take in fewer immigrants each year. So I think it’s worth looking at this conclusion closely. (This is me trying to avoid confirmation bias.)