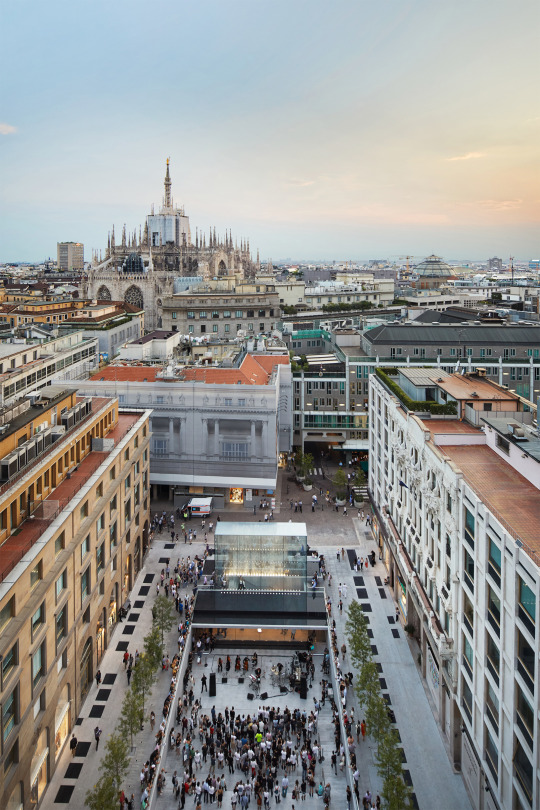 This past July, the Apple Piazza Liberty opened in Milan. Above is a photo from the opening via Apple. There’s a band playing in the middle of the piazza.

The store is central to Apple’s vision of transforming its retail locations into “town squares.” And in this case, the store is quite literally an Italian piazza.

There’s a lot that is interesting about this store and this strategic move, as well as what this could signal about the future retail. (Curbed discusses that here.)

The urbanists who read this blog will likely lament the privatization of public space. Because at the end of the day, it is a gray area. Can I hang out an Apple Town Square all day and just read a book?

But at the same time, this is not necessarily a new idea. From the very beginning, the modern shopping mall was intended to be a new kind of town square. Or at least that’s how Victor Gruen saw it.

However, what is perhaps new is this appropriation of public spaces for the purposes of what is arguably a new kind of retailing experience – one that almost feels paradoxical.

In the case of Apple Piazza Liberty, as well as in some of its other town squares, the actual retailing space is mostly hidden. Here it is underground. (How much to rent the basement?)

And yet, Apple’s presence feels monumental and almost sublime. Glass box, waterfall, and subtle Apple logo sitting in the middle of a beautiful Milanese piazza.