Years ago Aaron Renn coined an urban paradigm that he labeled “the new donut.” The old donut, of course, is one that many of you will know well: poor downtown (hole in the donut) and wealthy suburbs (ring around the hole in the donut). This is a well documented phenomenon in many American cities.

The new donut reflects today’s return to city centers. It is the filling in – albeit only partially – of the middle of the donut. The reason I say only partially is because the data clearly suggests that, in many cases, there’s now a trough between the immediate core and the outer suburbs.

In 2015, the University of Virginia published a study called The Changing Shape of American Cities. It looked at things like educational attainment and per capita income in 1990 and then compared it to more recent 2012-2015 data. But most significantly, it plotted this data against “miles from city center.” (I discovered this study via City Observatory.)

Here are educational attainment and per capita income for the 50 largest metro areas in the US. The orange line is 1990 data. The brown line is 2012 data. And the blue line is 2015 data. The x-axis is “miles from city center.” 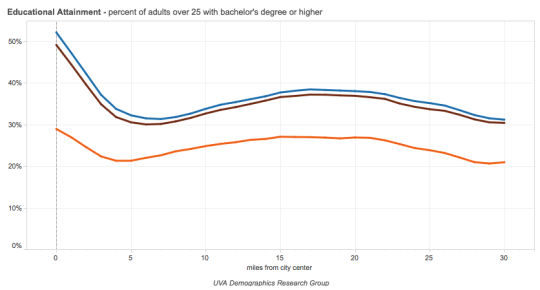 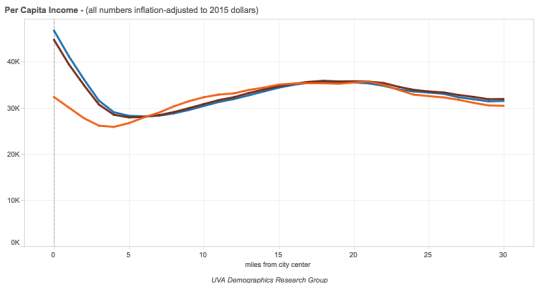 Compared to 1990, it is clear that there has been noticeable spike in education and income in city centers. For the above composite index, more than 50% of adults over 25 now have a bachelor’s degree. But it has also accentuated the trough that appears to sit, on average, about 5 miles out from the center.

In some metro areas, such as Charlotte (shown below), there has almost been a complete inversion. Education and income were highest 5 to 10 miles out from the center, but that has since flipped, along with a dramatic spike right in the center. 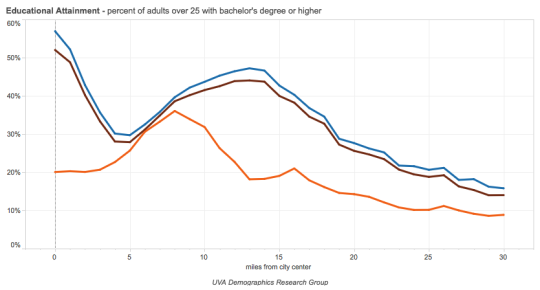 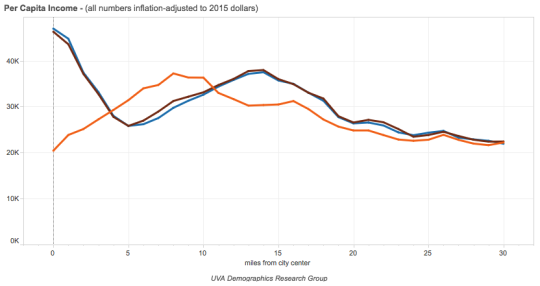 This is the new donut. If you’d like to see the graphs for all 66 American cities that form part of the study, you can do that here.