Last year Nolan Gray mapped out “the cities of the world where you don’t need AC or heat.” And just recently he updated his data with the help of Guardian Cities for their “sweltering cities” series. As part of the study, they projected out average temperatures, in both the summer and winter, to 2059, showing which cities may become more dependent on air conditioning. The answer looks to be many.

In his original study, Gray had 9 climatic categories, all of which were based on average high and low temperatures throughout the year. Category 1 was you definitely don’t need AC or heat. These cities are essentially perfect year round. And category 9 was you definitely need heat and AC. These cities are basically the worst places on earth to occupy from a climate perspective.

Here is that climate classification system in lovely chart form (note his caption): 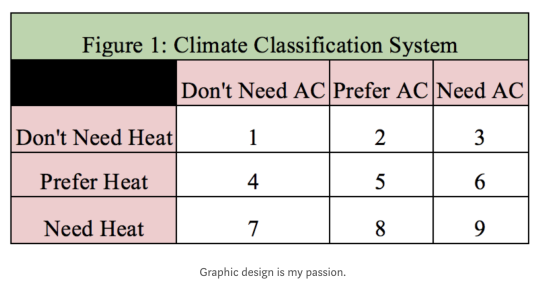 But one factor that is not included in the study is humidity, which Gray rightly points out has a meaningful impact on comfort. Toronto, for example, is classified in his system as category 7. Heat needed. But AC definitely not needed. Personally, I would bump us up to category 8: AC preferred, but not needed.

Still, this is an interesting study. There are relatively few cities with so-called perfect climates. And I have always found these sorts of climates fascinating because they empower a very different kind of relationship to outside spaces.