This is a language map of Toronto showing the most commonly spoken non-official languages at home. (It only counts individuals who reported speaking a single non-official language most commonly at home, as opposed to multiple ones.) The map you see below is based on 2016 census data, but if you’d like to check out the previous census years, as well as an interactive version, you can do that here at Social Planning Toronto. 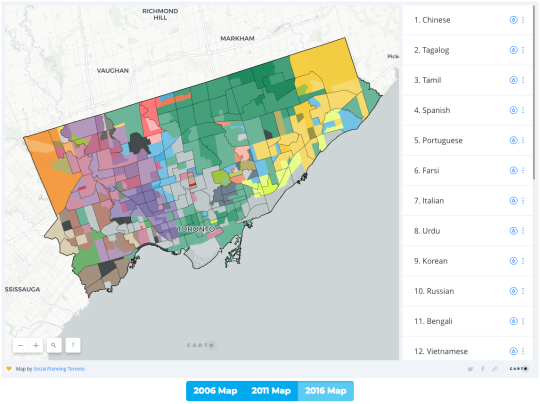 The top languages are also listed on the right of the map, with the exception of the gray areas. These areas indicate census tracts where English > 90%. I don’t know why French shows up as #13, since this map is supposed to be non-official languages.

In any event, green represents Chinese (includes Cantonese, Mandarin, and so on). Sky blue is Tagalog. And yellow is Tamil. I’ll let you play around with the map to explore the others. There shouldn’t be many surprises if you know Toronto well, but it’s still interesting to explore the clustering and the percentages. Some of the census tracts have a single non-official language representing 90%+ of the responses.

The biggest gains over the last decade – following the same methodology as the above mapping – were Tagalog, Farsi, Bengali, Arabic, and Pashto. And the biggest declines over this same time period were Italian, Tamil, Urdu, Punjabi, and Polish. But this data is only for the City of Toronto and so I suppose that a decline could also be because of people relocating to other parts of the region.

A big part of Toronto’s strength comes from exactly what you see in this map: the world in a city.