Yesterday we visited the Pérez Art Museum Miami (PAMM), which has been on my list since it first opened in 2013.

The Pérez part of the name belongs to real estate developer and art collector Jorge Pérez. He donated $35 million in cash to the Miami Art Museum in 2011 – so that the below building designed by Herzog & de Meuron could be built – and another $15 million in 2016.

This latter donation included some contemporary Cuban art valued at around $5 million. Supposedly after he dies Pérez will be donating the rest of his art collection to the museum.

Pasted below is a full copy of the architect’s description of the project to go along with my photos. It was taken from here.

This first picture faces the main entrance (on the left) and Biscayne Bay. In the background, toward the end of the terrace, is also a playground with swings. 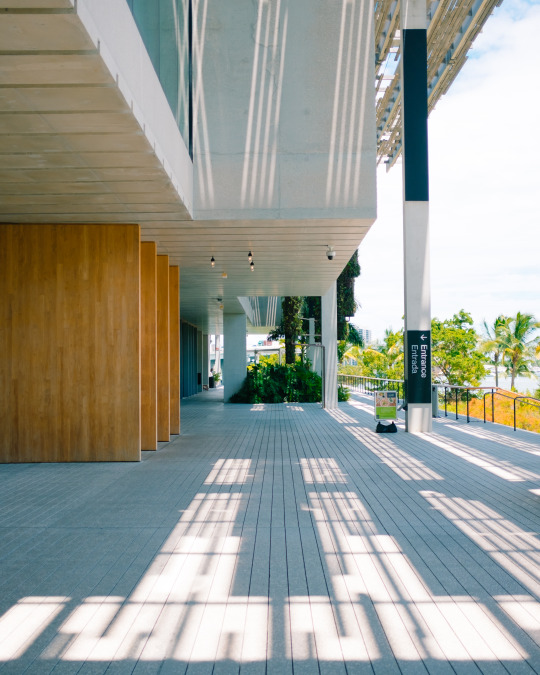 This picture shows the relationship between the “veranda-like public space” that wraps the building and Biscayne Bay on the left. Also note the hanging plants. These were great. 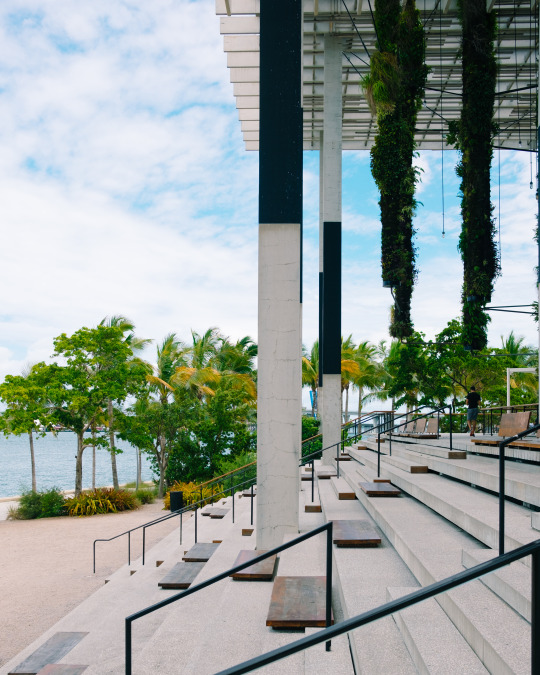 And this last picture is my attempt to show a kind of section through the building. Here you can clearly see the raised museum and at-grade parking (described below).

I also enjoyed that the parking level housed vegetation that cut through the above veranda. 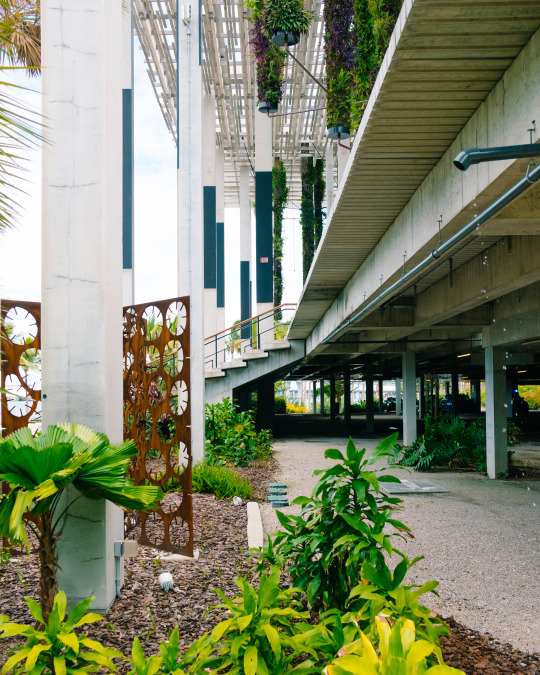 The new Pérez Art Museum Miami (PAMM) is located in Museum Park, part of the redeveloping downtown waterfront on Biscayne Bay. Its direct neighbours are the Patricia and Phillip Frost Museum of Science and a major freeway, connecting mainland Miami with Miami Beach. Simultaneously oriented towards the park, the water and the city, the new PAMM is an open and inviting structure from all sides alike.

Miami is known for its iconic art deco district, decorated boxes with no great relationship and exchange between inside and outside. What makes Miami so extraordinary however, is its amazing climate, lush vegetation and cultural diversity. How can these assets be fully exploited and translated into architecture?

As in previous examples of our work, such as the Dominus Winery in Napa Valley, the building’s environmental circumstances become central to its architectural concept. Due to its proximity to the water, the museum is lifted off the ground for the art to be placed above storm surge level. We use the space underneath the building for open-air parking, exposed to light and fresh air that can also handle storm-water runoff. Rising from the parking level, the stilts supporting the museum platform become columns supporting a shading canopy, which covers the entire site creating a veranda-like public space that welcomes visitors to the museum and the park. Facing the bay, a wide stair connects the platform to the waterfront promenade.

In this exceptional location, we wanted the museum to offer generous views to the outside. Yet all the building’s expansive windows are recessed, with wooden planks under the concrete beams to minimize the sun’s impact on the glazing and to reduce the building’s energy consumption for cooling. Tropical plants selected for their resilience to the local conditions engulf the structural system. Roof and plants combined will create an overall microclimate reducing the extreme temperature gaps between outside and inside in the hot weather. The exterior surface of the museum’s massive concrete walls is chiseled in places and polished in others. When adjacent to the glazing, the concrete is smooth and reflective. When facing the outside, the concrete becomes rough, exposing its natural ingredients.

Rather than being an isolated “jewel box” (Schatzkammer) for art lovers and specialists, the museum provides comfortable public space for everybody. It is an extension of the park, offering gradual transitions from the outside to the inside, from the warm to the cool, from the humid to the dry and from the street to the art.

The expression of the building comes from the canopy, the platform, the columns, the vegetation: in other words, the Veranda occupying the entire site. The museum’s interior volume nests within it, suspended amid the structural framework, each floor assuming the shape it needs. Because the galleries did not have to fit into any given form, we had the freedom to develop the curatorial layout, in close collaboration with the museum staff, to what felt like an optimal configuration to exhibit and develop the growing collection as well as to provide ample space for temporary exhibitions.

PAMM is organised around four different gallery types: Overview, Focus, Project and Special Exhibition galleries. They occupy part of the first and the entire second floor. The Overview galleries, displaying the museum’s collection, serve as the connecting tissue between the other gallery types. Fluidly connected in a non-linear sequence, they allow relationships to be formed between spaces. They are characterized by large openings with views onto the park, downtown Miami, the bay and the freeway. Along this flowing sequence of rooms, single enclosed spaces punctuated by windows show an individual artist, a theme, a specific collection or a commissioned work. These spaces are called Focus and Project galleries. The fourth type, the Special Exhibitions galleries function as spacious exhibition halls designed to accommodate contemporary art exhibitions. The Overview, Focus and Project galleries form a firm and rhythmic sequence through the building, varying in proportion and relationship to the outside. On the other hand, the Special Exhibitions galleries are flexible, with fewer openings to the outside and can be subdivided by temporary walls.

The spaces at PAMM and their materiality are very specific. They can be considered an antithesis to the flexible, abstract white cubes that have been a dogma in most recently built art spaces. Concrete and wood are used in different combinations, reflecting the outside materials of the building. Typical drywalls are detailed in a way that they are legible as added to the main structure. In order to enhance the inside-out transition, we designed a customized concrete mullion system that holds the largest ever-used hurricane-proof glass in Florida.

At the heart of the building, a stair as large as a gallery connects the two exhibition levels. This stair also functions as an auditorium, using sound-insulating curtains in different configurations to provide space for lectures, film screenings, concerts and performances. Our idea was to avoid for such events to be isolated in a space remaining unused for most of the time. At PAMM, events in preparation are visible. When the space is not actively used for events, it is used by visitors and staff for individual readings, introductions to groups and the like. The museum shop and bistro are located on the platform level and are oriented to the bay. Education and research facilities are on the third floor along with the museum’s offices. We place these communal spaces at the periphery of the building, maximizing their exposure to the Veranda, Biscayne Bay, and Museum Park.