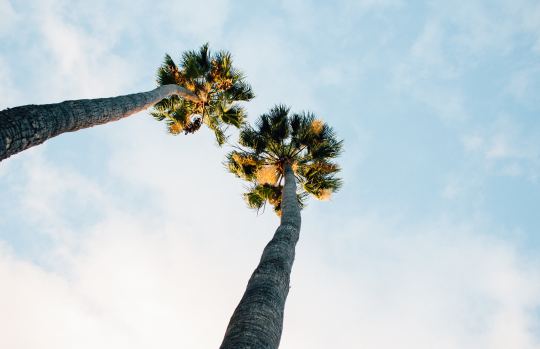 2018 marks the 60th anniversary of the Twin Palms neighborhood in Palm Springs, California, and Houzz has just published an excellent story describing the subdivision’s history and its importance for mid-century modern architecture.

Designed by architect William Krisel and developed by Alexander Construction, the community was initially built with 90 homes. Supposedly each lot was exactly 10,000 square feet and each house had the exact same 40′ x 40′ square floor plan. So 1,600 sf homes.

In addition to this, each lot had a carport, an open courtyard connecting the house and carport, and a swimming pool.

Unlike some of his contemporaries, Krisel was less interested in building one-off homes for the wealthy. He was more interested in tract housing for the masses. And standardizing the plans was one way to achieve greater affordability.

Krisel still found other creative ways to differentiate the homes, namely by rotating the square floor plan and by rearranging the carport, courtyard, and pool.

He also employed different rooflines, all of which have become emblematic of this era of architecture and of Palm Springs in general. It was about optionality on top of and around the box.

If you have a few minutes, check out the Houzz article. The homes are beautiful and the story is compelling: the modern American dream at an affordable price.

Photo by Nainoa Shizuru on Unsplash