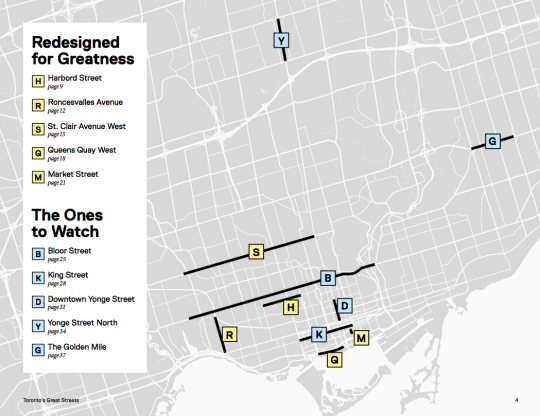 Last week the Ryerson City Building Institute published a terrific report on Toronto’s Great Streets. It profiles five streets in the city that have been “redesigned for greatness.” They are:

But what exactly makes a street a great one? The report describes it in this way: “They all play a key role in making the surrounding neighborhood a great place to live, work, and visit.”

This relates closely to what the City of Toronto calls a “complete street”, which is an approach to accommodating multiple kinds of users, enhancing the local context, and determining which trade-offs to make.

And there will always be trade-offs. I am fairly certain that all of these street redesigns were contentious at the time when they were proposed. Because at the end of the day they will never be all things to everyone.

I remember the St. Clair West fight vividly because I moved to the neighborhood in 2009 and the dedicated streetcar lane didn’t fully open until 2010. From 2005 to 2017, streetcar ridership grew 23%. But drivers have remained grouchy.

I now walk Market Street every single day and I agree that it’s one of the most beautiful and functional streets in the city. But the bollards are constantly getting beat up by drivers attempting to parallel park and the retail vacancy rate has not been 0% like is suggested in the report.

Queens Quay West is also a magnificent street. It was a giant step forward in terms of the quality of the public realm in this region and I spend a lot of time there. But it’s of course not perfect. All of us have seen the reports of cars ending up in odd locations, including underground, along the waterfront.

Riding your bike there can also feel like a challenging game of Frogger with all of the pedestrians that now obliviously meander back and forth across the cycling trail. I suggest riding with a good blow horn. The report rightly mentions the lack of delineation between these users.

But cities are a living laboratory and none of these streets should now be considered static. We are fortunate to be in a position to critique levels of greatness. If anything, the map at the top of this post tells me that we need to create more greatness across the other areas of this city.