“The concentration of economic growth and prosperity in large metro areas defines the modern global economy, creating both opportunities and challenges in an era in which national political, economic, and societal trends are increasingly influenced by subnational dynamics.” -Brookings Institute

The Metropolitan Policy Program at the Brookings Institute has a new report out for 2018 called the Global Metro Monitor.

– The 300 largest metro areas in the world accounted for 36% of employment growth and 67% of GDP growth.

– Metro areas in China and the Asia-Pacific region outperformed, whereas Latin American cities, and in particular the largest Brazilian cities, were weaker performers.

– The majority of large metro areas had growth rates that exceeded that of their respective regions. So again, cities are the driver.

And here is an interesting interactive chart (better to click through) that shows the % change in GDP per capita.

Look at how much of an outlier San Jose is. Though, check out Dublin in the footnote. And if you look at the actual data table, it is all China, except for Dublin at the top. 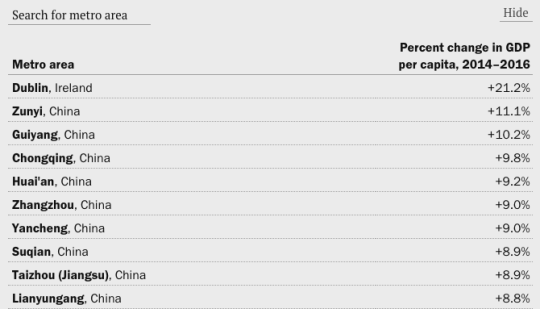