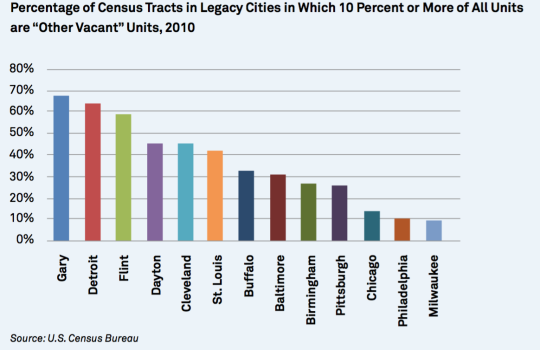 I was reading Aaron Renn’s post this morning on America’s vacant housing challenge and I was reminded of the stark contrast between what we are experiencing here in Toronto and what the US is experiencing in a lot of its coastal cities, compared to what is happening in many legacy cities in the US. The former industrial centers. In this latter case, the discussion is around neighborhoods reaching a tipping point in terms of vacant homes and then spiralling out of control. Below is an excerpt from a study that Renn cites in his post. It is from the Lincoln Institute of Land Policy and it’s called “The Empty House Next Door.” The above chart should also tell you a lot about the magnitude of this problem.

Hypervacancy has been rising steadily in legacy cities since the 1990s. Although only one out of sixteen census tracts in Cleveland was hypervacant in 1990, by 2010, one out of two tracts in that city had reached hypervacancy. When vacancies rise above approximately 20 percent of an area’s total properties, the number of vacant buildings and lots may continue to grow indefinitely. Although vacancies rarely reach 100 percent—because even the most distressed neighbor- hood may have a few long-term owners—the market effectively ceases to function. Houses sell, if they sell at all, only to investors at rock bottom prices while the neighborhoods become areas of concentrated poverty, unemployment, and health problems.