This recent post by Sam Karam at NewGeography illustrates the relationship between female literacy and total fertility rates in Sub-Saharan Africa, India, and China. The overarching argument, which won’t surprise any of you, is that, “higher female literacy is a reliable predictor of lower fertility and improved prosperity.”

The following graph uses data from populyst, the UN Population Division and UNESCO. The time period for the dataset varies by country but approximately corresponds to the latest 2000′s. All Sub-Saharan countries are represented, except for the Congo, Somolia, and South Sudan. 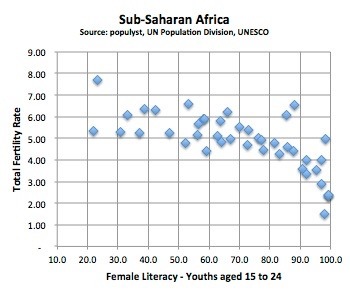 Noteworthy about this dataset is that the biggest decline in the total fertility rate happens precipitously after female literacy reaches and exceeds 80%. What is also interesting, but not surprising, if that the countries with the lowest gender equality rankings tend to also have high fertility rates. And that’s because low gender equality tends to translate into lower female literacy rates.

According to populyst, the above phenomenon – precipitous decline in TFR with rising female literacy – has already proved itself out in China.

For a more detailed look at the above data, check out this populyst post.