The National Center of Health Statistics just released this update on births and birth rates for the United States in 2017. The provisional number of births last year was 3,853,472, which represents a 2% reduction from 2016 and the lowest number in 30 years. The general fertility rate was 60.2 births per 1,000 women aged 15-44, which represents a 3% reduction from 2016. Also a record low.

Here is a chart from the report showing birth rates for selected age ranges from 1990 to 2016 (the 2017 numbers are provisional): 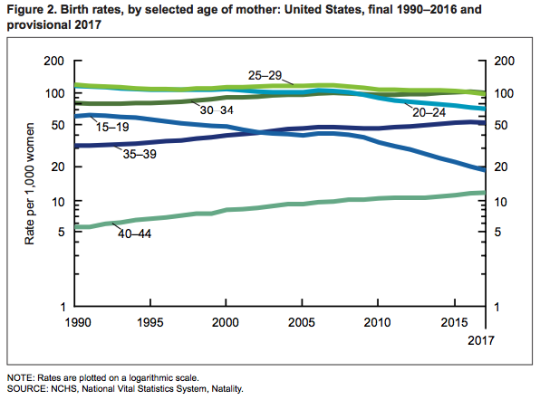 Many of the age ranges have remained stable. Notable are the decline in the teenage (15-19) birth rate and the increase in births to women aged 40-44. The teenage birth rate declined 7% from 2016 and has averaged a decline of nearly 8% a year since 2007. And the birth rate for women aged 40-44 has generally been rising since 1982.

I am sure that you can all think of many explanations for the above phenomena without even diving into the report. I find all of this relevant because demographics obviously impact the real estate business and how we build cities.