Earlier this year Uber sold its Southeast Asia business to Grab. At the time, it was estimated that Grab had 95% of the ride-hailing market in Southeast Asia. That’s why Uber decided to sell. Instead of continuing to bleed, they figured it would be better to instead merge businesses in exchange for a “sizeable stake in Grab.” This is similar to the deal that it struck in China with Didi.

It’s clear evidence of cultural advantage. Though maybe you could argue it’s first mover advantage. Either way, many, including Wired, have argued that while Uber has dominated in the West, it has often struggled in the developing world. Different markets. When Grab launched you could pay with cash because so many users didn’t have a credit card. 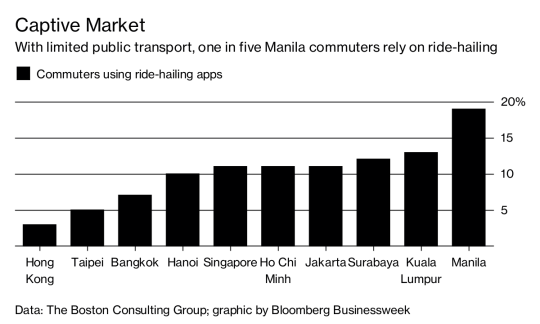 Here is another interesting insight from Bloomberg (see above): Nearly 1 out of every 5 commuters in Manila relies on a ride-hailing service because the public transit situation is allegedly so dire. Grab controls 90% of the market with 35,000 vehicles receiving somewhere around 600,000 requests a day.

When Uber launched it was positioned as “Everyone’s private driver.” It was expensive. It was luxurious. And it was done because they knew they weren’t going to be able to compete on speed and/or price in the early days. But now ride-hailing services are tackling the very opposite end of the spectrum.