The Globe and Mail recently ran an article arguing that tech salaries in Toronto are significantly less than those in the US and that it is leading to “alarmingly high rates” of brain drain. The claim is that the average tech salary in 2017 was US$73,000 in Toronto, compared to US$140,000 in the Bay Area or US$129,000 in New York City.

However, if you adjust these salaries for each city’s cost of living, the numbers look like this (chart taken from the same article): 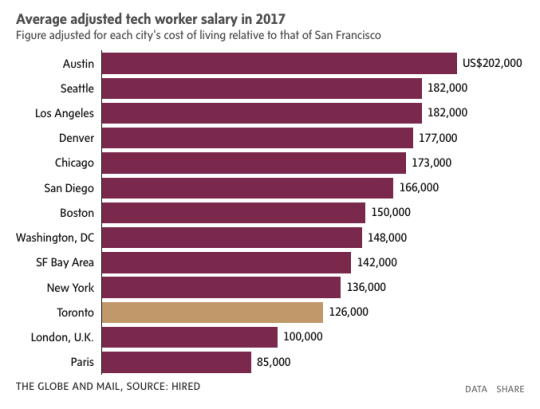 Now all of a sudden Toronto is lumped together with the Bay Area and New York City. It was adjacent to London even when you didn’t adjust the salaries. As Tobi Lütke – CEO of Shopify – points out in his Twitter rebuttal of the article, housing is the determining factor in this adjustment: “Toronto is a very expensive city, and Austin isn’t.”

Lütke also points out, in case you’re in the market, that Canadian-based Shopify pays its tech employees well above market, provides stock compensation, and is currently “hiring like crazy”. But perhaps more importantly, he stresses the importance of Canadians building the economy of the country in which they are from. I feel exactly the same way.