I like looking at real estate values over longer periods of time because it helps to put things into perspective.

Below is a land value index for Manhattan running from 1950 to 2014 that was recently created by economists out of Rutgers University. 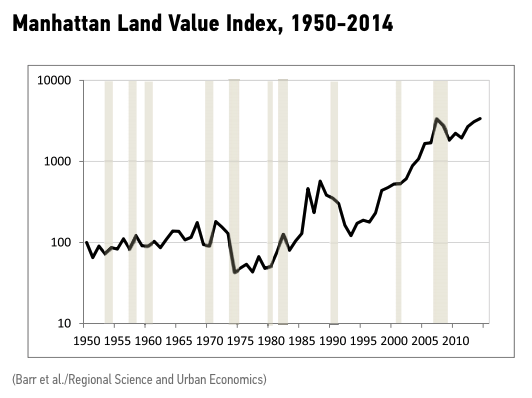 The study was also cited in this recent article by Richard Florida.

Here are some of the highlights from their study:

We find three major cycles with land values reaching their nadir in 1977, just after the city’s fiscal crisis.

Since 1993, land prices have risen much faster than population or employment, at an average annual rate of 15.8%.

We estimate the entire amount of developable land on Manhattan in 2014 was worth approximately $1.74 trillion.

We estimate the long run return to Manhattan land values [since the island was first inhabited by Dutch settlers in 1626] to be about 6.4%.

What’s fascinating to me is the accelerated appreciation. The index starts at 100 in 1950, ends up slightly above that by 1993, and then simply takes off.