Many of you are probably aware of the 58-storey Millennium Tower in San Francisco which is estimated to have sunk about 17 inches and to have tilted about 14 inches to the west since it was built.

Well today it was announced that they may have a fix. Here is what is apparently being proposed as a retrofit (image from SFGate): 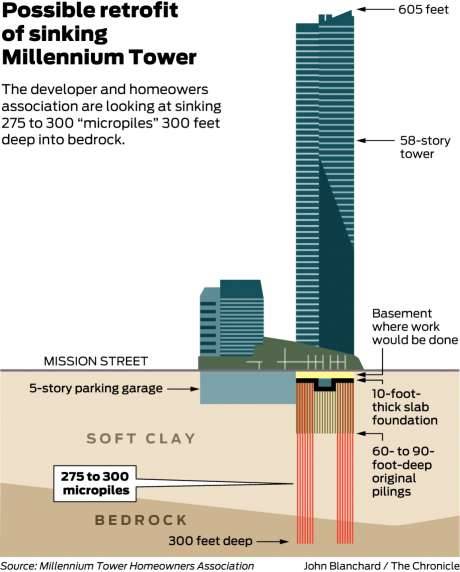 The tower was originally built on top of a 10 foot thick raft or mat foundation, which was then supported by concrete piles that went down 60-90 feet into soft clay. Notably, the piles didn’t reach bedrock.

According to SFGate, the entire retrofit is expected to take anywhere from 2 to 5 years, and cost somewhere in the range of $200 to $500 million. The original tower cost $350 million to build. (I’m assuming that’s just the hard cost number.)