This is a fascinating study by Issi Romem about the characteristics of cross-metropolitan migration in the United States. The key findings are that in-migrants to expensive coastal cities tend to have higher incomes and more education than the out-migrants, and that the opposite is true for the less expensive cities in the US. “Expensive” means expensive housing.

Here is the income chart: 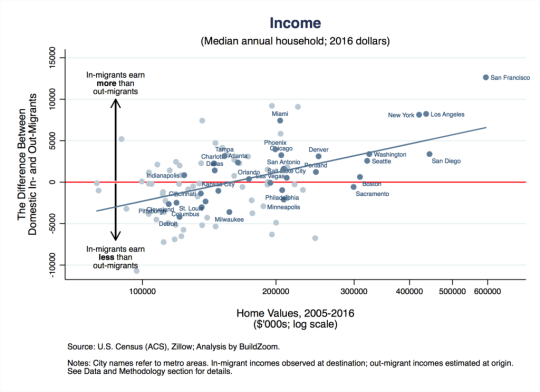 Let’s use San Francisco as the example since it’s the most expensive metro (all the way to the right on the x-axis). The way to read this is that on average, from 2005 to 2016, in-migrants to the San Francisco metro area earned $12,640 a year more per household (y-axis) after they arrived compared to out-migrants before they left. This chart shows the difference between in and out incomes.

Take note of Miami which is sitting at a similar place to New York and Los Angeles on the horizontal income line, but has home values similar to Phoenix, Chicago, and Philadelphia. 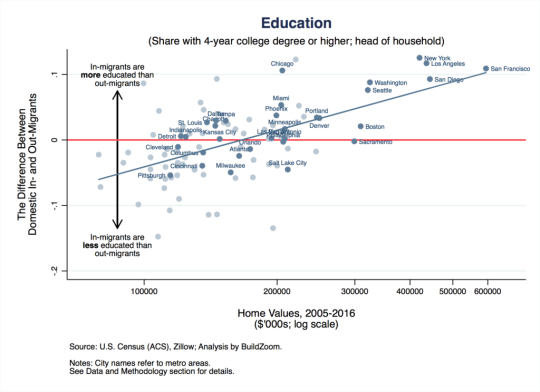 Similarly, it is showing the difference in educational attainment between in and out migrants.

So what does all of this tell us?

Well, it tells us, among other things, that US metros are continuing to sort based on income and that this process of polarization is probably contributing to home price appreciation. Because even if the incomes of current residents aren’t growing, these “expensive cities” are effectively swapping out poorer residents for richer ones. That, alone, would mean more money for expensive homes.