The City of London Corporation recently published a report called “The City as a Place for People”, which talks primarily about itself and how great London is as a magnet for talent.

But as self-serving as it may be – the report is timed to be ahead of this year’s MIPIM – there appears to be some data and interviews backing up the claims.

58% of “institutional investors” said that London is the best European city for business. Dublin was next at 22%.

A separate survey of 2,568 “corporate decision makers” in Europe revealed that 21% of respondents felt that London was the best European city for business, followed by Paris (13%) and Frankfurt (7%). When asked which city had the best talent pool, the responses were fairly similar.

Also included in the report is a rendering of the City’s skyline by 2026. These are always fun to see. Here is a screen grab: 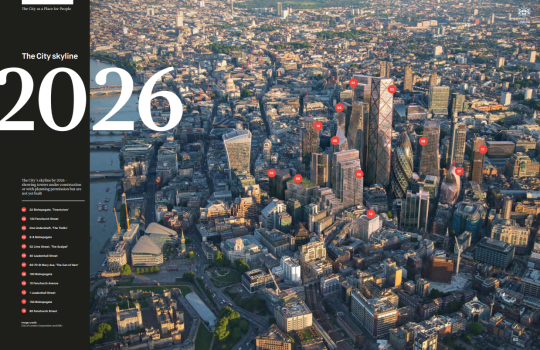 It is showing all towers under construction and all towers with their planning permissions in place. If you’d like to download the full report, you can do that here.